In 1970, conceptual artist Mel Bochner created an art piece called “Misunderstanding (A Theory of Photography).” For this work, Bochner, who enjoyed nothing so much as interrogating modes of representation in art, commented specifically on assumptions about photography. The piece consisted of quotes regarding the medium from well-known figures and reference books, each handwritten on a 16-by-20-inch notecard. Marcel Proust’s bruising observation, for instance, was “Photography is the product of complete alienation.”

Another assumption came from the Encyclopedia Britannica: “Photography cannot record abstract ideas.” While not the actual impetus for “Tad Beck: Eyes of,” the current photography show at Grant Wahlquist Gallery (through June 12), this notion metaphorically throws down a gauntlet that Beck has been challenging for years.

The series of abstract portraits was conceived before the advent of COVID-19 as part of Beck’s self-imposed winter isolation at his Vinalhaven studio. The pandemic, of course, intensified that isolation, resulting in this rich body of work. As a way of staying connected to friends during this time, Beck asked artists “whose vision has shaped or inspired Beck’s own” (in the words of the press release) to send him a pair of their eyeglasses, which he then photographed on a sheet of checkerboard. He developed this image and then trained his Hasselblad camera on that.

This was the first step in an iterative process in which Beck took multiple photographs of photographs (sometimes up to 50 over the course of months for a single final portrait). For each image that followed the initial still-life on checkerboard, Beck clamped the eyeglasses in front of the camera lens, thus shooting each successive image “through the eyes of” his individual subjects. The glasses’ condition, prescription strengths and coatings, as well as the various angles at which Beck placed them before his camera lens, refracted light and distorted the subsequent image in new ways.

“The destination was always to obliterate the original glasses and create a new abstract space I couldn’t scientifically explain with my understanding of the camera lens,” Beck told me when I met him at the gallery to see the show. The colors and forms that appear in the finished large-format works (they are all 42.5-by-32 inches) are luminous and mysterious not only to the viewer, but to Beck himself.

Beck postulates that some colors might come from the way light pierced the eyeglass frames or the way an antiglare coating caught and disbursed the ambient light (most were shot in natural light, though occasionally Beck employed artificial lighting to heighten certain effects). Still other colors, he says, are probably “chromatic aberrations,” defined by Wikipedia as “a failure of a lens to focus all colors to the same point. It is caused by dispersion: the refractive index of the lens elements varies with the wavelength of light.”

Art and creation, of course, are ephemeral rather than purely scientific. If everything can be explained scientifically, the mystery of the creative process would be undermined. Only by moving past the explainable and quantifiable can photography communicate abstract ideas that the Encyclopedia Britannica claims it cannot. So, Beck’s inability to explain the color phenomena only egged him on. “Play was just as important as technique,” he says. “If I could understand what was happening,” – that is, figure out exactly which color was caused by what phenomenon – “that tended to push me to keep going.”

The selection of the checkerboard as a basic matrix for all the works was no accident. It is a conscious reference to optical exams designed to test the accuracy of our perception and, thus, an added layer in Beck’s exploration of photography’s limits as well as what it can convey beyond purely objective representation. Among the subjects who sent Beck their glasses were R.E.M.’s Michael Stipe, Maine multimedia artist Alison “Wooly” Hildreth, Missouri-based video artist Charles Atlas, California installation artist Andrea Zittel, Chicago-based interdisciplinary and conceptual artist Nyeema Morgan and many others. What is most remarkable about the series is the way each final image conveys something about the essence of its subject. Even if we knew nothing of the process involved, and even if the titles did not identify the subject, an ineffable presence emanates from them.

Once we know “who” we’re looking at, we inevitably grasp at the associations we hold of that person, which seems to individuate her or his image in a fitting way. Yet the actual essence of the subject remains blurry – certainly visually, as the distortions of the eyeglasses mostly dissolve clear outlines and bend, twist and warp the checkerboard in fluid, constantly shifting ways. But though we can feel an essential presence, we cannot hold it or fix it in place. “John O’Reilly,” for instance, is Beck’s portrait of the brilliant Massachusetts-based photo montage artist and, indeed, the images appear almost pieced together and layered like a collage. They are also sensual in the way that evokes the mood of some of O’Reilly’s homoerotic works, which luxuriate in the musculature, suppleness of skin and longing of young male bodies. Yet the essence of O’Reilly the man, as with many of that artist’s images, is enigmatic. It is continuously oscillating, unfolding and morphing, which, with any luck, is what our mutable souls tend to do.

The two “Michael Stipe” portraits are flooded all over with bright splashes of blue, pink and white light that appear to glow from within the picture, illuminating the darkness. It is almost impossible not to correlate them with stage lights in a dark theater that shower a performer with colored light from overhead. A pair of “Andrea Zittel” portraits are awash in golds, sandy beiges and reddish browns. This may be total chance, possibly just the combination of the effects created in the image by her eyeglasses and the light that permeated Beck’s studio that day. But considering that Zittel often works in the California desert, it seems beyond coincidence somehow, as if the portrait is channeling the environments she creates and her own love of these arid landscapes.

Wahlquist, the gallery owner and Beck’s husband, points out that Beck studied painting before turning to photography, and that these images reveal a Color Field painter’s sensibility. This is true to some extent. But he also shares a visual – though not thematic – affinity with Ross Bleckner, whose paintings seemed also to shimmer and glow with a mysterious inner light.

Once again Beck smashes the idea that photography cannot capture abstract ideas. It is probably true that conventional photography cannot, depending as it so fleetingly does, on fixing a specific instant in perpetuity. But contemplating these works that are produced over time is like gradually getting to know each subject. Though we likely can’t say exactly why, we come away from “Eyes of” feeling as if we understand something deeper and more personal about the people they abstractly portray.

Jorge S. Arango has written about art, design and architecture for over 35 years. He lives in Portland. He can be reached at: [email protected]

Deep Water: ‘The Eyes of Love,’ by Michael Tarabilda

The Camera That Made Photography Accessible

Sun Mar 21 , 2021
A Kodak Brownie No.2 Model F released in 1924. (Photo: Wikimedia Commons, Public domain)This post may contain affiliate links. If you make a purchase, My Modern Met may earn an affiliate commission. Please read our disclosure for more info. The start of the 20th century marked the advent of popular […] 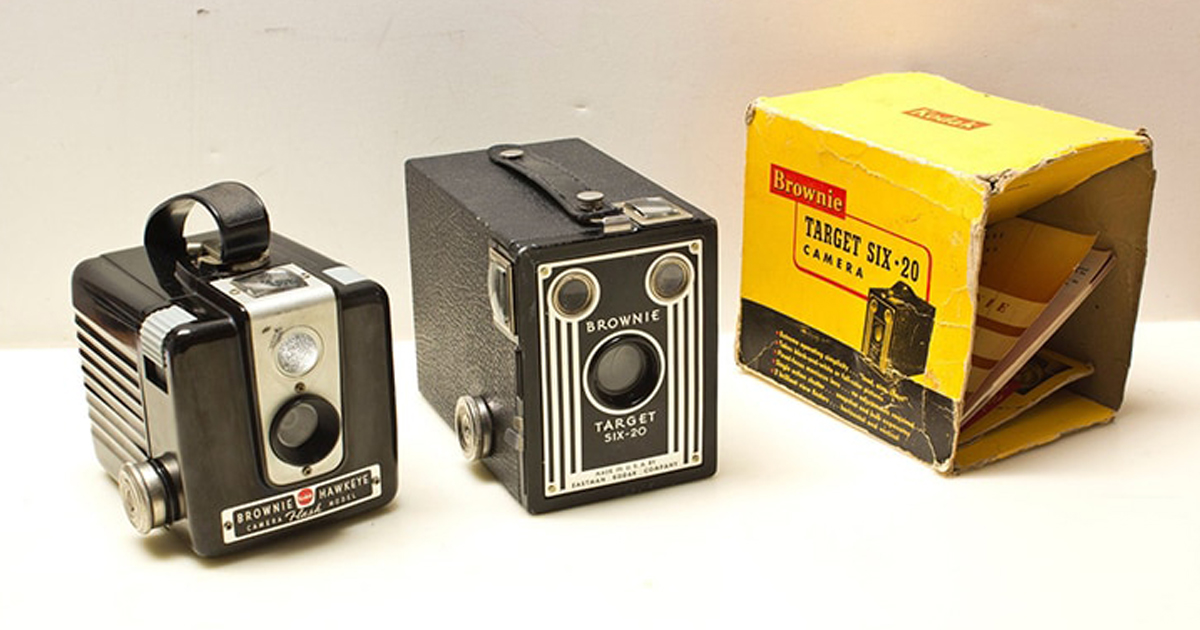