He joined CAL in November, became the community manager, and then was hired as executive director in March. Dukes and part-time staff members Kate McAlister (assistant director) and Chandler Snipes (offsite exhibit coordinator) work with CAL’s board of directors and committee members to schedule exhibits and programs.

Not afraid to tackle issues

In June, CAL featured programs to that addressed issues related to Black Lives Matter. Spoken word artist Jah Smalls read several of his works at a virtual exhibit called “Just Words.” A virtual discussion on Zoom, “What Now” invited people to drop in, listen and add their thoughts.

CAL ended the month with “In the beginning, there was the word,” an old-fashion drive-in with a twist: It featured spoken word artists standing at CAL’s warehouse doors and guests listening with their car windows open.

Poet Glenn Proctor is fairly new to CAL’s board. Like Dukes, he wants CAL to become the most diverse and engaged studio space in Charlotte. “Let CAL be the standard bearer,” Proctor said.

When asked about CAL’s involvement in social issues such as the Black Lives Matter movement, Proctor asked, “Why not? Why not jump out there and be at the forefront of community conversation but in that creative space,” Proctor said.

“We’re setting a baseline for Charlotte,” he said. “We’re not afraid to tackle the issues, whether it’s through community conversation, writing, artwork, photography, spoken word or in a creative genre that’s different and also pushes people’s buttons and not afraid to tell Charlotte or America’s reality as it really is.”

Property management company Cushman and Wakefield asked CAL to paint over the boarded up windows on one of its properties on North Tryon Street.

Chandler Snipe saw the project as a way to connect the community and she invited the Charlotte-Mecklenburg Police Department to work with the artists.

DeNeer Davis, a CAL member and lead artist on the project, showed officers how to paint. Though some onlookers were confused as to why CMPD was there, it started conversations between artists, officers and the community, Snipe said.

“We came out of that with an organic art installation festival,” Snipe said. “When people were walking past, it was invoking conversation. That’s really what the target for that (event) was.”

In January, the CAL exhibit committee developed themes for the 2020 exhibit schedule. Topics such as August’s “Politik” and September’s “Imagine a Non-Violent Charlotte” reflect the nonprofits vision to involve the community, build partnerships and generate discussions about social issues.

“We collectively decided that our exhibits needed to be more than just a time to come and look at art, listen to music and go home,” Dukes said. “It needed to be a time to reflect and communicate and continue those discussions throughout the month.”

In April, CAL offered a virtual exhibit, “Ab’Strakt.” It may have been the first one in Charlotte, Dukes said. Visitors viewed 20 works on the website and could click on links to artist bios.

CAL’s 9,500-square-foot space on Raleigh Street across from the Sugar Creek Lynx Station near NoDa contains studio, classroom and exhibit space. It’s free to visit and up-to-date hours are on the website.

CAL’s budget is driven by donations and grants. The $117,000 operating budget is through the Arts and Science Council.

CAL’s most recent fundraising effort, The Giving Tree, is for Healing Art Programs. Dukes’ idea for Healing Art Programs – classes for veterans, older adults and trauma survivors – came from classes he created as an artist-in-residence at Tapp’s Outpost in Columbia, S.C. and then as director of healing at Big Red Barn Retreat in Blythewood, S.C.

To increase CAL’s reach in Charlotte’s Latino community, its offering a bilingual acrylic class taught in Spanish and English this summer.

“Our diversity is purposely increasing,” Dukes said. “We’re always on the lookout for artists that are creating unique art, having a unique why and unique purpose. Our feeling is that diversity and culture adds spice to the soup. It adds flavor to everybody’s art. We can all learn and grow and experience something different.”

Want to get more arts stories like this delivered to your inbox? Sign up for the free “Inside Charlotte Arts” newsletter at charlotteobserver.com/newsletters

You can also join our Facebook group, “Inside Charlotte Arts,” at https://www.facebook.com/groups/insidecharlottearts/ 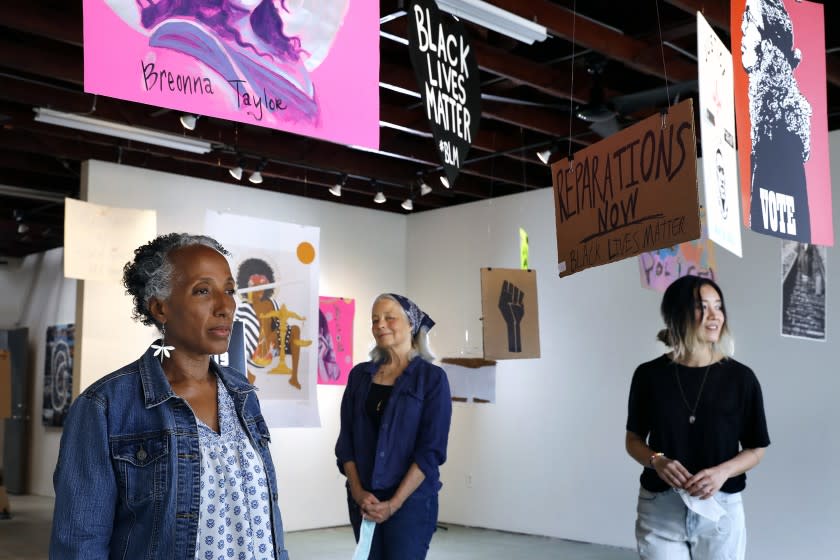