The PSLE countdown begins now. (Or is it too late already 😅)

After two previous experiences with the boys, it is Ale’s turn this year – I know right, how on earth did time fly by so quickly??? – and even though I would love to say “been there, done that”, I think the stress level for parents never do diminish.

Because as things stand now, we are about FOUR months away from the PSLE. But that’s not to say I’m panicking – thanks to me being a seasoned two-timed PSLE parent, I have learnt that instead of just imploring kids to try their best all the time, I have to focus on something more tangible — putting in a reasonable amount of effort in their school work. So all this while, the wifey and I have been taking turns to sit down with Ale for 20 to 30 minutes every weeknight for revision.

Well, it is working pretty well so far… when it comes to Mandarin, Math and Science.

As for English… can someone tell me how does one begin teaching English to a child? By reading the dictionary? Or by doing countless exam papers? Or by memorising essays?

Turns out that there is a far easier solution – the British Council! 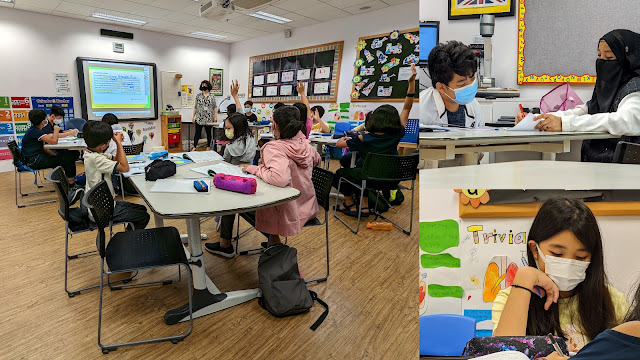 With over 80 years of expertise in delivering English language education, the British Council‘s enrichment courses for Nursery 1 up to Secondary are student-centred and aligned to the syllabus set by the Singapore Ministry of Education (MOE).

British Council’s internationally qualified and experienced teachers provide a safe, supportive and dynamic environment to help each child succeed at every stage of their academic journey whilst developing the essential 21st century skills and proficiencies to be able to thrive in the fast-changing world.

Or so they claim.

But what I really want to know is what really goes on behind those classroom doors? Are the children engaged and how do one really cultivate the love for learning the English language?

There was only one way to find out – and that was to sit in during one of the lessons. 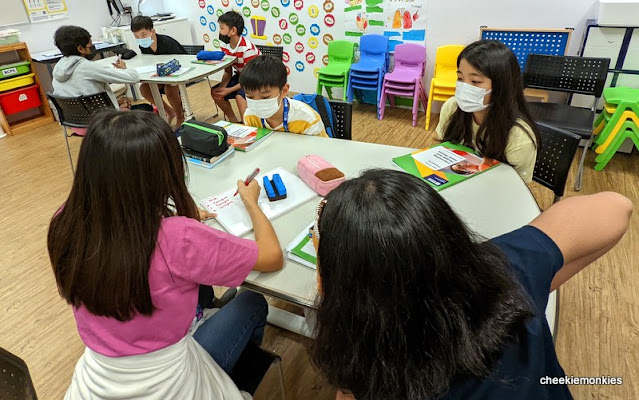 Since Ale would be taking her PSLE this year, she joined the Upper Primary PSLE Preparation Class which focusses on comprehension tuition and composition topics for exam preparation.

And after spending a mere two hours within the class, I can see why all of the students were so enthusiastic during class time!

What makes the British Council stand out?

British Council’s courses for Primary children are interactive, communicative and carefully structured to build each child’s skills and confidence in English.

Designed in line with the syllabus set by the Singapore’s Ministry of Education, the curriculum not only prepares the students for exams but also equip them with practical English skills that will accompany them for life. 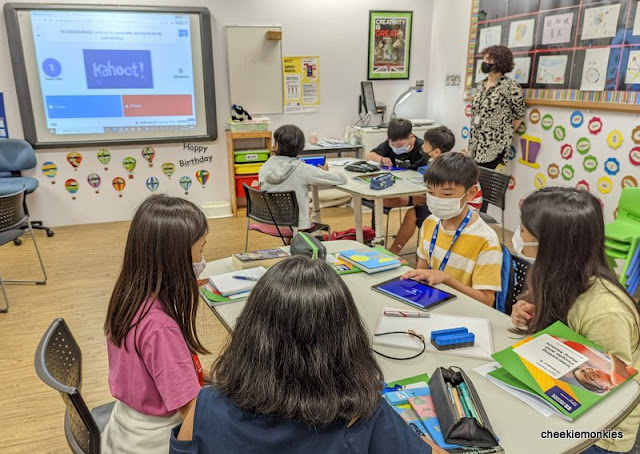 While I was sitting in one of the lessons, the teacher was going through Reading Comprehension skills. Before this, all I knew about tackling comprehension passages was to read through them in detail and try to pick out the main words and points. 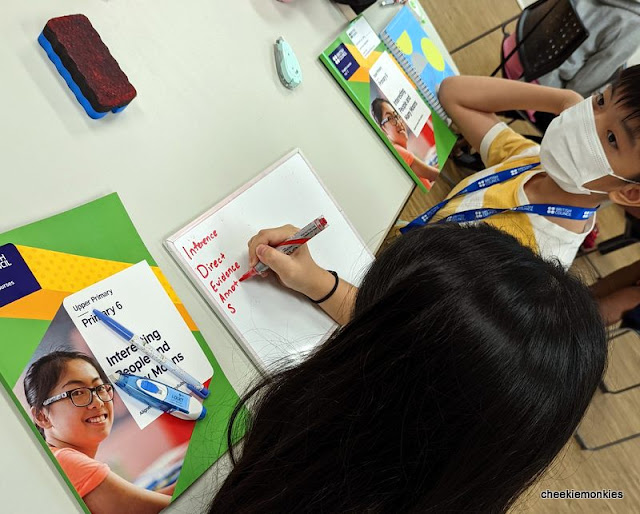 But I was surprised that there were actually MORE techniques involved to ace the comprehension section! And these were what the students did when attempting to answer questions from the passage:

– Activating prior knowledge and making predictions 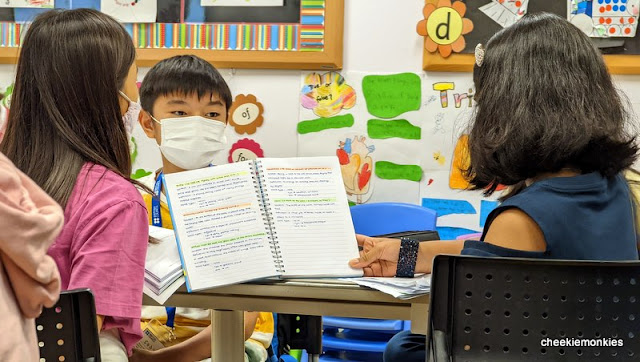 I learnt later that throughout the academic year, the students will focus on literature, helping them grow as passionate readers and build on their written and communication skills through individual and group practices.

No matter how good the curriculum is, it will count for nothing if the learning environmen is not conducive.

For the class that Ale was in, I kid you not when I say it was a bundle of energy and activity! 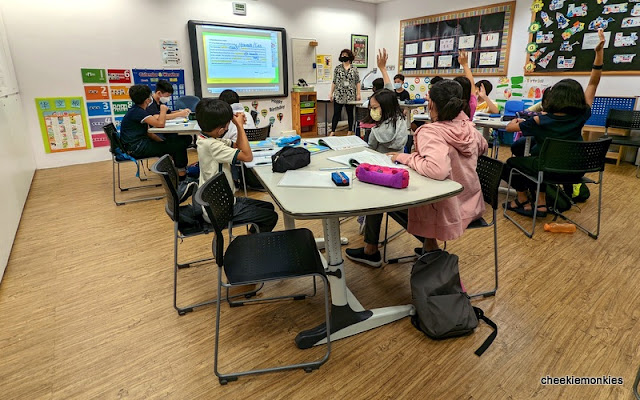 The students were eager to answer questions and enthusiastic to attempt challenges that the teacher threw at them, just so that they could earn the opportunity to play a game of Kahoot (iPads were provided by the school)! 😆😆😆 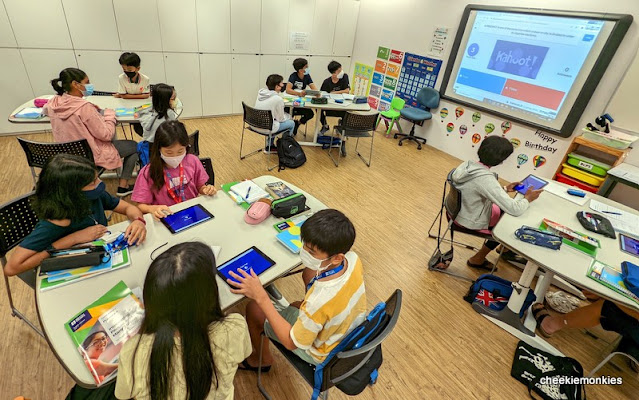 Ale was understandably a little shy in the beginning since it was her first time attending. But I could see that the enthusiasm gradually rubber off her and she began to partake in the quizzes more. 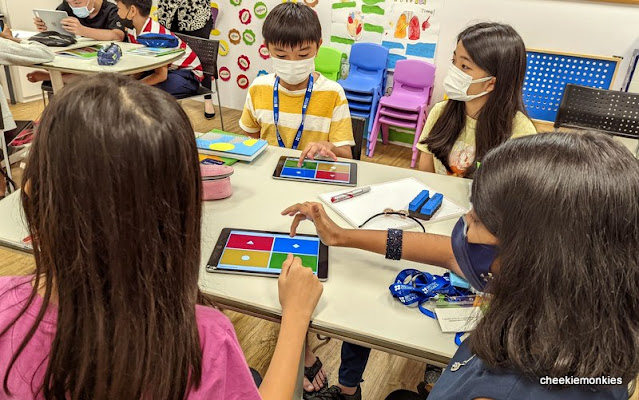 Of course, the teachers at the British Council have a huge role to play as well.

Ale’s teacher was super animated which made the lesson a truly enjoyable one to attend. At least that was what I could see from the students’ response. 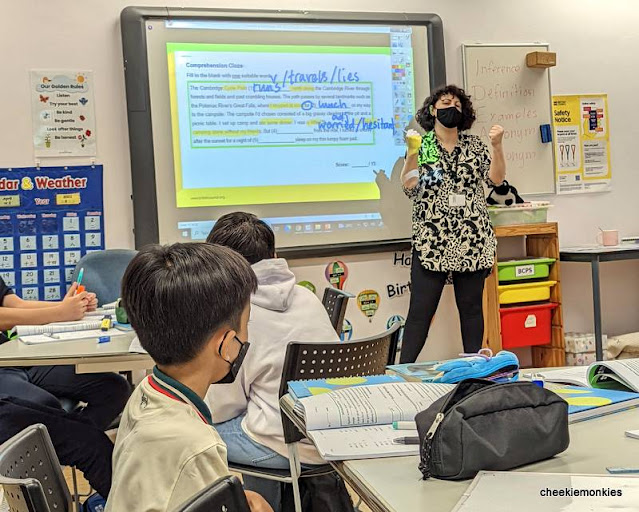 I love how she made learning English such an enjoyable experience – where the end goal isn’t just to ace one’s exams but to embrace learning so that using English correctly in real life comes naturally. 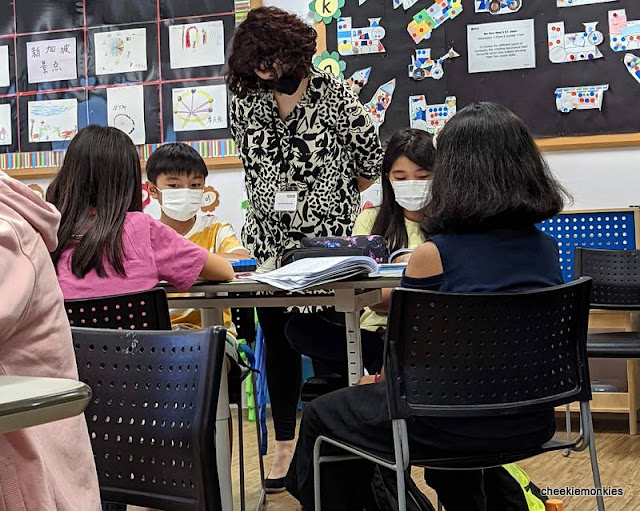 State of the art learning facilities

I’ve got to say that I was highly impressed by the factilities in the classroom. It is fitted with cutting edge teaching tools such as interactive whiteboards and digital visualisers, on top of learning tablets that are provided to the students in class. 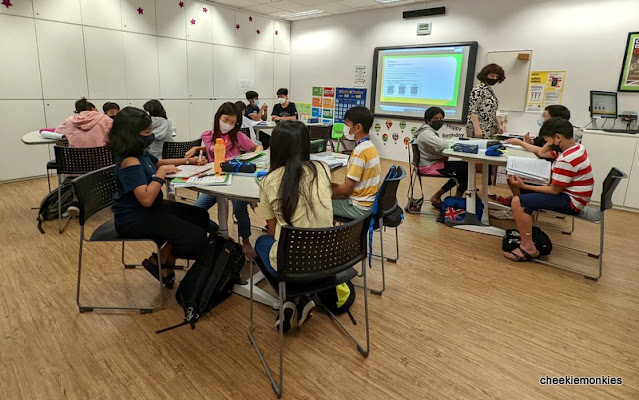 What did Ale think of the class?

She totally enjoyed herself… which was a surprise since she appeared to be reluctant when I first told her that she will be attending an English class at the British Council. Boy, did her opinion change after that short two hours! She loved how fun and interactive the class was, and it helped that the classmates who she was seated with, were so helpful and friendly seeing that she was a newbie in class.

What did I think of the class?

My favourite part of the class was when the teacher tasked the students to reflect on their strengths and weaknesses in relationship to the tasks they completed each week. This could be in the form of learning new words, new meanings or new techniques. I certainly love how they are encouraged to take control of their own learning both inside and outside the classroom, and empowered to work on areas for improvement to boost their future performance.

And here comes Ayd too…

But the British Council isn’t just for younger kids and primary school children. They also run classes for secondary school students, and even adults! 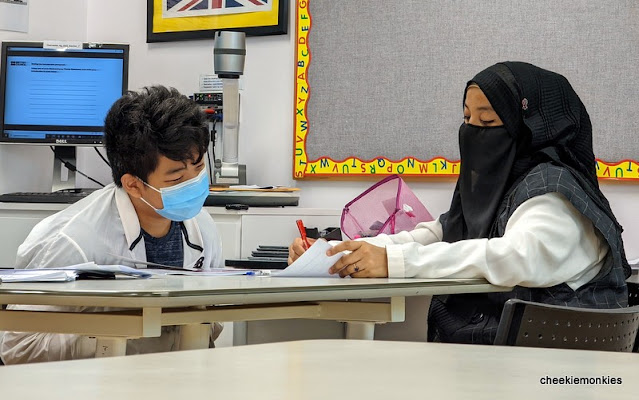 Which meant that Ayd also had the chance to experience the O-Level Preparation class, since he is in Year 4 this year. 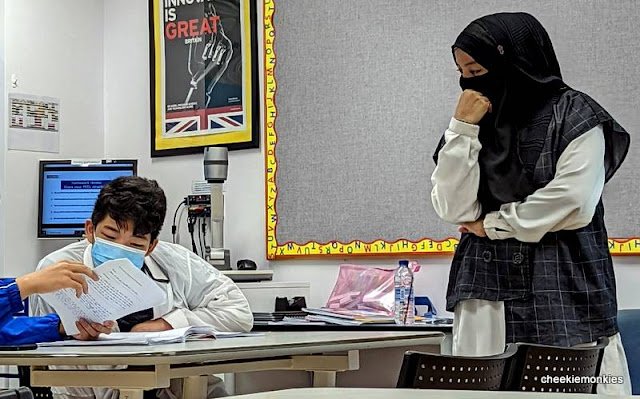 And you guessed it – he was TOTALLY reluctant to attend the class when he first learned of it. 😅

But attend in the end, he did… and just like Ale, the class completely changed his opinion of a so-called English ‘tuition’ class. 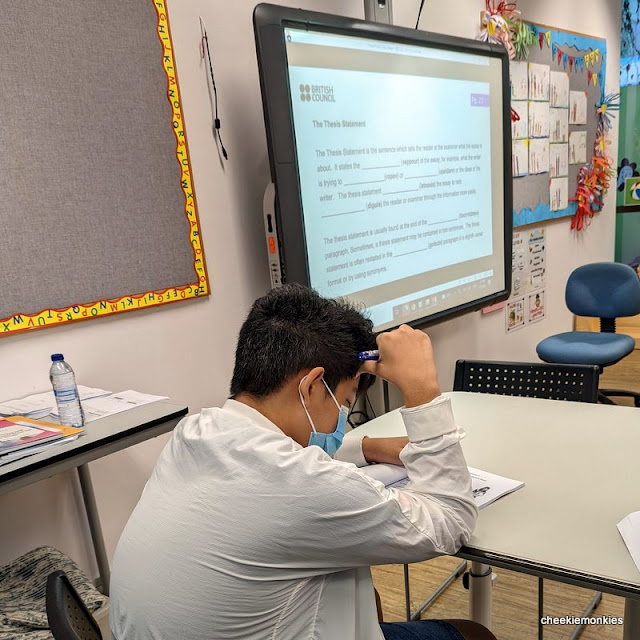 For his lesson, the teacher was focussing on essay writing which to be honest, is tough to teach at the O-Level standard. But you know what makes it even tougher? Teenagers are your audience. 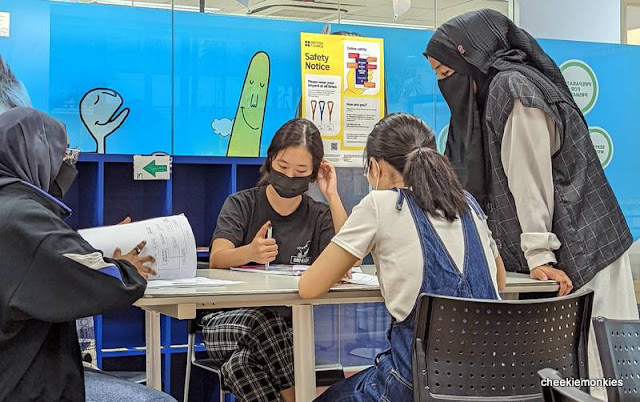 I, too, sat in Ayd’s class and it came as no surprise that the teaching style was markedly different from Ale’s class. With Ayd’s class, it was all about imparting good writing techniques and skills. 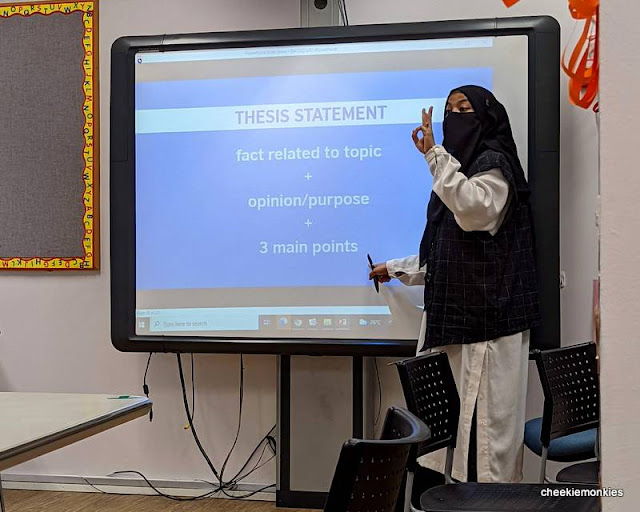 And the teacher was able to hold the 16-year-olds’ attention! In fact, Ayd was totally won over by the end of the lesson because he picked up valuable writing tips to aid in his essay writing – like the main points one should always include in the opening paragraph of the essay so that the examiner has a good idea of the essay outline. 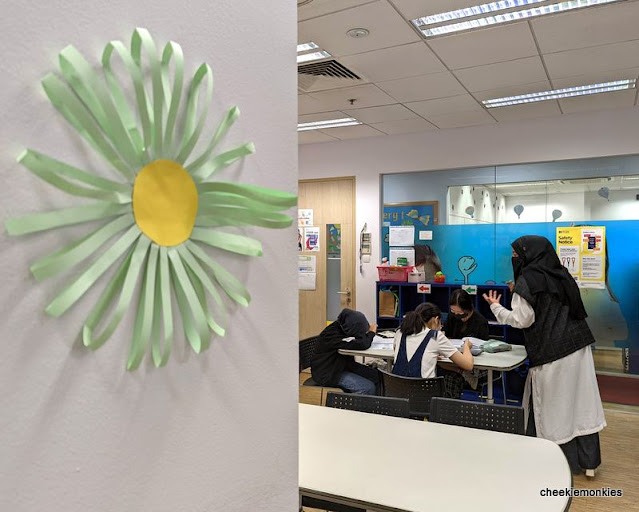 Ayd admitted that it was a fruitful two hours, and he shared that he was going to apply what he learnt in the upcoming mid-year exams! 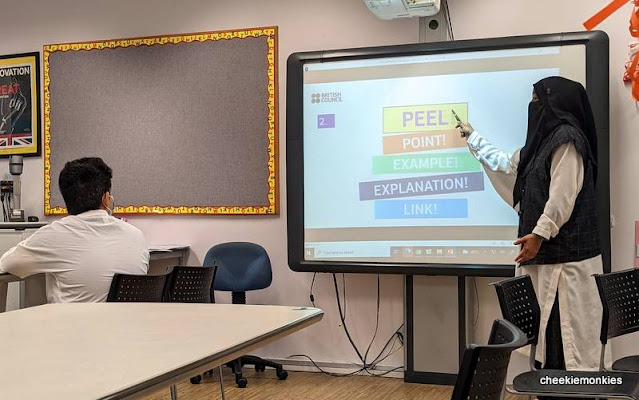 But don’t just take my word for it…

You have the opportunity to head down to and let your child experience it because the British Council is having an Open House on 11 and 18 June 2022! 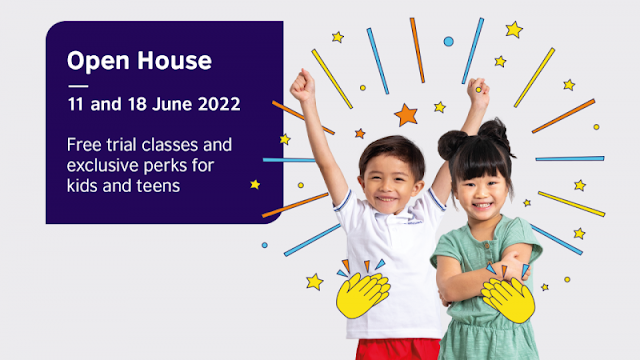 Parents and children will get the chance to experience British Council’s Young Learners courses, with trial classes available for kids and teens.

Should you decide to sign up on Open House day, you get to enjoy these following perks too: 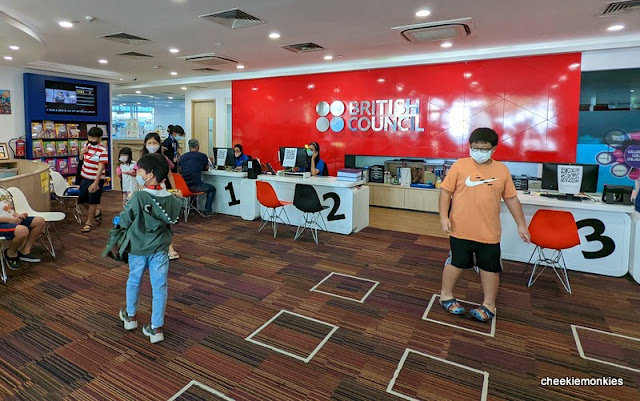 Sun May 22 , 2022
[ad_1] We are getting increasingly comfortable with the idea of having a community of bacteria living inside and on our bodies. Health experts have convinced us that we need to care for the “friendly” bacteria in our gut while the beauty industry sells probiotics-infused mists and potions that will maintain […]