As a series of prequels to the Harry Potter movies, a third movie in the world of wizardry was recently released in the Fantastic Beasts series. Despite the new movie’s mixed reviews, it still provides a delightful new variety of cute and imaginative creatures. Let’s take a look at the star of the film, the qilin 麒麟, as well as some other creatures—real and imaginary—that are commonly depicted in Chinese art.

Warning: Please note that there are SPOILERS ahead.

The creature that plays vital role in Fantastic Beasts: The Secrets of Dumbledore is the qilin 麒麟. It appears as a sacred animal with the gift of prophecy and is entrusted with the power to choose the next wizard leader. The animal has a long history in Chinese culture and can be found in the current exhibition, Escaping to a Better World — Eccentrics and Immortals in Chinese Art along with many other fantastic creatures in Chinese culture.

The recent Chinese art gallery rotation features paintings, porcelain, and metalwork that tell stories of legendary eccentrics and immortals who have unconventional appearances or behaviors. When taking a closer look, we can find all sorts of animals accompanying these legendary figures—some are decorative motifs, some are pets and companions, some are vehicles for travel, and some are beasts with magical powers. The depiction of the animals, some dazzling and some amusing, reveal the adoration Chinese people have had for animals and all living creatures. Combined with religious and philosophical ideas, this affection has resulted in a mythology of animals and a sophisticated visual language of Chinese animals on paintings and on decorative arts.

1. The Qilin: An Animal of Mercy

On the belly of Zhongli Quan, the Daoist immortal, we find the sacred animal qilin (fig. 1964.193). It has a dragon’s head, a body covered in scales, and a furry ox tail, not quite like the deer-like qilin in the film. As a matter of fact, qilin’s appearance can be flexible. In a document from the Han dynasty (202 BC — AD 220), it is described as “an animal of mercy (renshou; 仁獸)” with the body of a deer, the tail of an ox, and one horn.[1]

The Book of Songs (Shijing; 詩經), a collection of poetry dating from the 11th to 7th century BC, is probably the earliest document that mentions qilin. In this poem, despite qilin’s hoofs, brow, and horn, which can be powerful weapons in confrontations, it does not engage in physical violence. It is thus praised for having high morals and is linked to a good ruler:

The qilin’s hoofs!
The duke’s sons throng.
Alas for the qilin!

The qilin’s brow!
The duke’s kinsmen throng.
Alas for the qilin!

The qilin’s horn!
The duke’s clansmen throng.
Alas for the qilin![2]

Other historical writings describe qilin as an animal that can tell a good soul from a bad one and is capable of choosing the rightful ruler. This feature, demonstrated in the walk of the qilin ceremony in the latest Fantastic Beasts film’s climax, appeared in other popular culture as well. In Ono Fuyumi’s fantasy novel series The Twelve Kingdoms (Jūni Kokuki; 十二國記) and the anime based on it, qilin embodies the heaven’s will and has the power to choose a kingdom’s ruler.

In China, qilin has been a popular decorative motif with auspicious meaning. Because of the close connection between qilin and the legitimacy of one’s rulership, the animal was also used on rank badge (buzi 補子), marking the top ranking military officer (fig. 1948.71). This qilin on the CMA’s rank badge has two horns rather than one as described in the Han text, again showing its myriad appearances.

From the same pair of the Daoist porcelain figures, we can find another super star in the mythology of animals—the dragon—featured on Han Xiangzi’s belly below.

2. The Crane: A Bird of Longevity and Purity

If the qilin and dragon are imagined, we can find cranes in the real world. With its white plumage, red crown, and graceful movements, the crane has been the most admired bird in China. Its popularity also stems from its deep association with all major Chinese philosophies — Daoism, Buddhism, and Confucianism, as seen in the current exhibition.[3]

Cranes have been a Daoist bird symbolizing longevity. As the Song dynasty (960–1279) encyclopedia Taiping yulan (太平御覽) documents: “Its white color indicates its clean nature; its red crown indicates that its calling reaches heaven…It flies among the clouds, and thus it has rich feather and skinny physique; its large throat exhales the old and its long neck inhales the new, thus its longevity is immeasurable.” [4]

Cranes were often portrayed as the vehicle of Daoist immortals or flying among auspicious clouds. The Daoist cranes appear on two plates, shown above (1956.709) and below (1989.315) in the exhibition, demonstrating the popularity of the motif. On these two plates, the cranes are carrying sticks above a pavilion in the sea, expressing the wish “May you live to a ripe old age (haiwu tianchou; 海屋添籌).”

The crane is also featured in Buddhist art, as is demonstrated in the luohan (or arhat) exhibited in the gallery and shown below. In an undisplayed section of the long handscroll, a group of luohan are depicted riding all sorts of mystical birds. On the right, a luohan is riding a white bird with a red crown, no doubt a crane. These birds are flying toward a cliff, where a gibbon and another luohan are greeting them. The Chan image of the crane is often paired with a gibbon, a combination that refers to the past life of a gentleman. This image might find its origin from the legend of a Zhou emperor’s war, in which all soldiers were destroyed — gentlemen were transformed into gibbons and cranes, while the ones with questionable morals became bugs and sand.[5] In Song dynasty, 11th-century Chan painters like Muqi (牧谿) developed the crane and gibbon pair into a popular Buddhist image.

The elegant physiques and white feathers of the cranes were also associated with lofty morals and became pets of Confucian literati. For example, although no crane can be seen in the painting The Poet Lin Bu Wandering in the Moonlight (1954.582), it features the poet Lin Bu (林逋)(967/968–1028), who is known for regarding cranes as his children. Later records mention that when Lin Bu led his reclusive life beside the West Lake, he used to have two cranes as pets. Lin would be out on a boat visiting temples. If visitors came, Lin’s servant would set the cranes free. Seeing the cranes as a signal, Lin would turn his boat and go back to greet the visitor.[6] Thus the cranes became a symbol of Lin Bu’s reclusive lifestyle and noble reputation.

3. The Toad: A Humble Creature with Magical Powers

If the crane’s elegant appearance explains its popularity, the legends of the toad can only find its explanation in people’s rich imagination and ability to see the magnificent in the mundane. The toad has been associated with the moon. The earliest document can be seen in a Han dynasty text: “There is a crow in the Sun and a toad in the Moon.”[7] This belief is best exemplified in the famous funeral banner excavated in a Han tomb, on the top of which is the sun with a crow in it on the right, and the moon with a toad on the left.

The toad is also associated with the story of the moon goddess, Chang E (嫦娥), and is believed to be a resident of the moon. On the Octafoil Mirror with Lunar Palace shown below (1995.375), the toad is shown sitting besides a rabbit pounding herbs, another popular motif associated with the moon. Legend says that Chang E consumed the elixir of immortality that she stole from her husband, the archer Yi, and flew to the moon. One version of the legend even states that after Chang E took the elixir, she turned into a toad.[8] The Chinese mythology of the toad and the moon might have inspired J.K. Rowling’s idea of the “moon frog,” a kind of frog that is also native to the moon in the world of Harry Potter.

When on the Earth, the toad is also an auspicious creature, especially those with three legs. They are associated with Liu Haichan, a Daoist immortal and a god of wealth, and thus embodies the wish for fortune. In the portrait of Liu Haichan included below (1982.29.2), a three-leg toad is looking at a string of coins attached to Liu Haichan’s waist.

In the current FREE exhibition Escaping to a Better World in gallery 240A, you may be surprised to see all sorts of animals, like best supporting actors, interacting with the legendary human figures. These animals, whether imagined or real, embody people’s good wishes, whimsical sense of humor, and sometimes their wish for a long rulership and harmonious society. The exhibition runs until November 6, 2022.

Wed Jul 20 , 2022
[ad_1] Geography is one of the most fascinating subjects for youthful youngsters. Remembering the names of the 7 continents is one of the early problems for younger learners – and that is exactly where the Montessori Continent Track arrives in. This music is a ton of pleasurable for children to […] 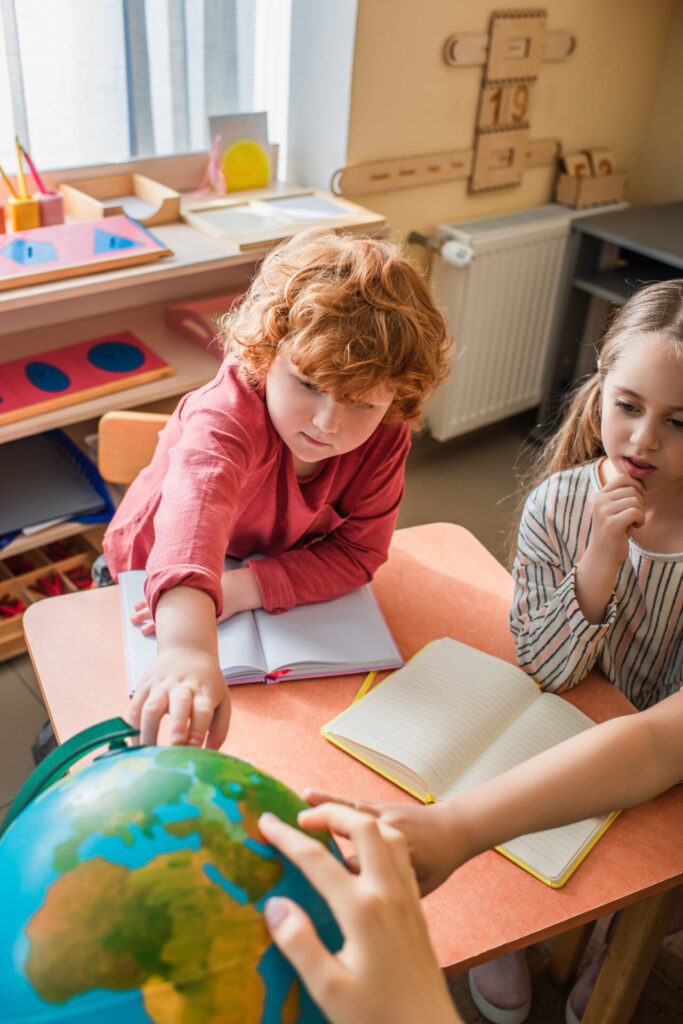