Photography as an art form is relatively new on Guam. There have been visiting photographers on Guam since the early 1900s. However, the evolution of photography as a form of artistic expression of the island residents has only happened within the last thirty years.

Travelers who visited Guam, along with the military, used photography to document Chamorro life. Helen Paul, a U.S. Navy officer’s wife and a schoolteacher on Guam in the early 1900s, was one of the earliest known persons to document early Chamorro life and Guam.

In July 1927, the father of the religion of Scientology, L. Ron Hubbard lived on Guam as a military dependent. At the age of sixteen, Hubbard learned photographic techniques from Thomas Mayhew, a photographer living on Guam, and started a lifelong interest in photography. In May 2007, the L. Ron Hubbard Foundation exhibited his work from that time, including portraits of Chamorros and images of the villages of Hagåtña and Tumon.

L. Ron Hubbard continued to pursue his career as a professional photographer and journalist throughout his life. He would later become famous for his science fiction writings and for founding Scientology, partly based on his experiences on Guam.

U.S. Navy combat photographers and personnel kept archives of black and white photography taken on Guam of the Chamorro people, some of which are displayed in public buildings and used in history books. However, pre-World War II family photos and portraits are rare due to poor storage conditions caused by Guam’s humid climate and typhoons. Many photographs, along with other family mementos, were also destroyed during the ravages of WWII.

In 1944, visiting renown photographer Horace Bristol came to Guam and photographed scenes of daily life of Guam, after Chamorros experienced thirty-one months of enemy occupation during WWII, and tried to piece together their lives and homes during the post-war recovery period.

Bristol was a Life magazine photographer known for his photos of migrant workers during the Great Depression. He then became a U.S. Navy photographer during WWII, and after the war freelance assignments brought him back to the Pacific and Asia. In 2004, the Guam Humanities Council presented “Guam 1944: The Photography of Horace Bristol” exhibit which included twenty-four vintage photographs showcasing the people and scenes during the recovery after the war.

Several other prominent photographers worked for Delgado including, Phil Noble, Julian Ereno, and Eduardo Siguenza. Two of Delgado’s career highlights were photographing the inauguration of Governor Ricardo J. Bordallo in 1975 and later Catholic Pope John Paul II during his 1981 visit to Guam.

During the 1970s a new demand for photography in the tourism industry provided opportunities for local photographers. Notable photographers of the 1970s included Mitchell Warner, Manuel Perez and Eduardo Siguenza.

Warner arrived on Guam in 1968 and through the lens of his camera began the documentation of Guam and Micronesia. For thirty-forty years, Warner has produced a library of more than 50,000 images taken on land, in the air and underwater. As a freelance photographer he has mastered aerial, underwater, product, and large format photography. He has been chosen by the many clients of the Guam Percentage for the Arts Committee to provide Photo Art Decor for public places such as the Superior Court of Guam, the Chamorro Village—both in the island’s capital of Hagåtña—and Guam hotels.

Tim Rock started his career as a television news photojournalist in 1972, working mainly for WOWT-TV in Omaha, Nebraska. A lover of the sea, he travel often to the Yucatan and Bahamas. In 1976, Tim Rock established his company Marine Images, a photography, motion picture and stock photo agency, and worked to produce underwater and travel imagery. Along with a couple of National Geographic staffers, he was one of the first contracted underwater photographers for Animals, Animals, a now well-established agency New York based agency. His first written diving article was published in the magazine Skin Diver in 1980. His love for diving and the marine world led him to look for work in the Pacific.

Rock came to Guam as the chief photographer for Guam Cable TV News in September 1981. He worked as photo chief, reporter and weekend sports anchor. In 1985, he took over as editor of the Pacific Sunday News magazine, Islander, a position he held for a decade. During this time he self-published the first diving guide book to Guam and Micronesia. Four updated volumes of that book were printed over a the of years. He also started the magazine Pacific Below with Richard Biolchino and Stefanie Brendl in 1995. Rock has since produced the TV Series Aquaquest Micronesia, authored more than a dozen Lonely Planet diving guides and has his own web-based book store offering over 30 of his print books on diving and travel. He is considered a premier underwater photographer on Guam and is published worldwide.

Manuel Perez started the photo department of the Pacific Daily News where he worked from 1971 to 1997. In 1991, Perez won the Guam Press Club award for lifetime achievement. His good friend, Eduardo Siguenza, also worked as a photojournalist at the now defunct newspaper Guam Tribune in 1979 and later as a freelancer for Reuters. Siguenza also worked for Guam Governor Carlos Camacho as his official photographer. Siguenza, along with brothers Manny and Edwin Crisostomo, credits Perez as his mentor.

The Crisostomo brothers Herman, Manny and Ed, all photographers, have had a great influence on Guam photography as an art.

Manny Crisostomo is a multimedia photojournalist at the Sacramento Bee newspaper. An extensive list of awards is highlighted by his being awarded the 1989 Pulitzer Prize for feature photography for a twelve page article “A Class Act: The Life and Times of Southwestern High School” while working as a photojournalist at the Detroit Free Press. In 1991, he took a sabbatical and returned to Guam to document the island and the Chamorro people in a coffee-table book of black and white images, Legacy of Guam: I Kustumbren Chamoru.

Manny Crisostomo published Latte Magazine in Guam from April 1995 to August 2000 and operated the Manny Crisostomo Gallery at Guam Premier Outlets in Tamuning where he displayed and sold his work as well as those of other Guam artists. During this time he also published a book of aerial photographs, Guam from the Heavens.

Ed Crisostomo, also an award winning photojournalist who currently works in Riverside County, California at the Press Enterprise newspaper, has an art photo installation hanging at the A.B. Won Pat Guam International Airport Authority in the check-in area. The installation is a collage of multimedia prints of historical photos, documents, paintings and portraits.

A former photo assistant of the Crisostomo brothers, Victor Consaga, became one of Guam’s leading art photographers beginning with his exhibit in 1998 titled “Historical Perspective”. The show, supported by a National Endowment of the Arts grant through the Guam Council of Arts and Humanities Agency, featured cultural imagery of Guam in the form of black and white infrared hand-colored prints. The subjects of the images were local models wearing Spanish period clothing at historic sites on Guam. Cultural icons such as the latte (stone pillars with capstones) and pictographs were also shown using this technique. The resulting images have been printed as a poster series promoting the preservation of Chamorro culture and Guam’s environment. Consaga and fellow photographer J.R. Manuel teamed up while producing the coffee table book Portrait of Guam, U.S.A., released in July 2008.

Former U.S. Navy photographer John “Ike” Eichensehr was an influence in the fashion and glamour photography scene during the late 1990s. He produced several calendars of beautiful women, two of which were black and white nude photos and portraits usually in an island setting such as a beach or waterfall, but sometimes in his studio. He then moved to Hong Kong where he is now a well-published editorial and commercial fashion photographer. His recent book Oriental Eye, published in 2007, features several black and white photos of Guam models along with Hong Kong celebrities and Asian models. 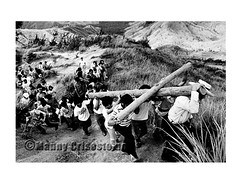 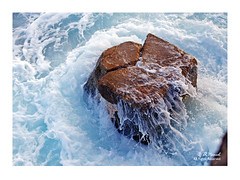 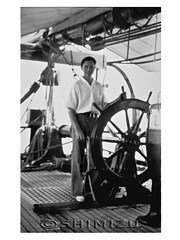 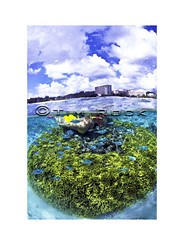