The 2022 Frieze art fair officially kicked off this week at a new location in Beverly Hills. Guests from all over the world gathered with extra vigor after last year’s fair was canceled due to the pandemic.

The fair teemed with life and what first-time Frieze Los Angeles fair director Christine Messineo described as a “a celebration of the city.” The festivities brought together artists, collectors, designers and curators, as well as the newly added BIPOC Exchange, which invited L.A. organizations from marginalized communities, including People’s Pottery Project, Las Fotos Project and Tequio Youth/MICOP, among others, to share and discuss projects inside the Wilshire Garden at the Beverly Hills Hotel.

There wasn’t a moment when each of Frieze’s three tents wasn’t brimming with attendees, who strolled around the fair with an exuberance and excitement to be together, amidst art, after such a long hiatus. The fair will run through Sunday.

An artist, curator and director for Storage Art Gallery, Onyedika Chuke was excited to meet fellow artists at Frieze L.A. and see the work of other Black artists at the fair. Chuke lives in New York City and travels frequently to attend art events.

Darling Squire, a Chicago-based choreographer, arrived at Frieze 2022 looking sharp. A first-time attendee, Squire says they were drawn to the art fair for “networking, meeting people and getting familiar with the art scene.”

Sharon Coplan Hurowitz, an independent curator and the founder of Coplan Hurowitz Art Advisory, arrived at Frieze wearing a Jeremy Scott Moschino safari dress inspired by the popular Yves Saint Laurent version. It’s equipped with a full arsenal of storage pockets, which Hurowitz found perfect for toting around accessories useful during the fair, such as a brush. “I work in the art world, so I was excited to come back after a two-year hiatus, and I also have to say that the weather brings me here,” Hurowitz says. “It’s the art, the weather and the people — in that order.”

Born and bred in South Central Los Angeles, Aleali May designs shoes — Nikes to be exact. She collaborated with the shoe brand to create the popular “Fortune” Air Jordan 14. “I’m the first woman to put out a unisex sneaker,” May says. “Obviously girls love the brand, so it’s pretty inevitable that it’d happen.” This year, she’s attending Frieze L.A. in hopes of learning more about how design and fashion can converge to form new creative projects.

A New York City-based curator and gallerist, Destinee Ross-Sutton is no stranger to the art world. It’s her third time attending Frieze L.A., and she’s made a point to go to the art fair’s East Coast rendition in her hometown for five years. Sutton enjoyed the overall “energy” and “life” of the Los Angeles fair this year, along with several intriguing Charles White pieces.

“I thought it was incredible,” says Tinie, an artist and musician, of Frieze LA. “I’ve been to Frieze in London a good few times … [Frieze L.A. is] a lot smaller than the one in London, but still great.” Tinie found the portraits created by Kehinde Wiley especially striking; they remind him of the upcoming series he’s working on for BBC One, “Extraordinary Portraits.”

Peter Dundas, of the fashion brand DUNDAS, had the opportunity to design clothing for the 2022 Super Bowl, including the boots and gloves Mary J. Blige wore during the halftime show in Los Angeles. After the Super Bowl, he stayed in Los Angeles to attend Frieze week. Dundas and his partner, Evangelo Bousis, are first-timers at Frieze but have frequented shows in Europe and Miami.

James Cohan owns an eponymously named contemporary art gallery in Manhattan, New York, which is a hub for art, painting, video, installation, photography and sculpture. He came to Frieze this year so he could meet others in the industry and share artist contributions from his gallery.

A self-described “collector and fan of the arts,” Marcus Paul was happy to attend Frieze Los Angeles for his third time and “nurture” the relationships he has with galleries. In particular, he appreciated work from Carlos/Ishikawa, Danielle Mckinney and Marianne Boesky at the fair.

Michael Silverberg decided to attend Frieze with his family this year to check out pieces by Camille Henrot and other contemporary artists that he collects work from. This is his first time attending the art fair. It looks like his fellow attendee, Leah Silverberg, is also glad they stopped by.

Traveling to Los Angeles from Brooklyn, New York, Zurich Deleon was eager to support the work of Tariku Shiferaw as his assistant at Silver Arts Projects. Deleon felt “overwhelmed” by the sheer amount of things to look at during Frieze’s opening day but loved the experience.

Karolina Dmowska works at Culture Works, a company that collaborates with Frieze partner NeueHouse (and invited her to attend the event). She took note of how many artists craftily repurposed materials and to make original work.

“Honestly, I’m just so happy that Frieze L.A. is back after two years of being gone,” she says. “I was lucky enough to be part of the team when it launched in 2018.” To watch Frieze grow and thrive has been, as she puts it, a “real pleasure.”

Joline Nehoray, co-founder of Beverly Hills Lingerie, was quickly drawn to Anish Kapoor’s “Golden Mirror.” It resonated with her in ways that other pieces had failed to. She was invited to the fair by her future mother-in-law, a dedicated art collector.

As a casting and creative director, Tyler Adams, of South Central Los Angeles, arrived at Frieze L.A. to represent a client and “see what different galleries” came to showcase at the fair this year. He caught up with a few friends inside the tent, where he was taken by a Takashi Murakami piece that he found “really cool.”

Small Wonders is one painting in a series called “One of These Black Boys,” by artist Tariku Shiferaw. The series explores physical mark-making, or the surface markings of a painting, as well as metaphorical mark-making that Shiferaw describes as “the way that society” leaves a mark, in addition to “who’s allowed to leave a mark.” Shiferaw explains that said markings signify important things in his life, like the “Black diaspora, rap and hip-hop, jazz, blues, Afro-beat” — things that he sees himself in. It’s Shiferaw’s first time showing his work at Frieze.

Photographed from the back, Olivia Rawnsley peers at a painting by Bob Law. Three years ago, Rawnsley, associate director of Thomas Dane Gallery in London, visited Frieze Los Angeles for the first time. For her, returning for the first time since then has been “wonderful.”

Sat Feb 19 , 2022
Jeffrey Thelin has a goal to create a piece of art every day for ten years straight HARRISONBURG, Va. — Every day for just over six years now, Virginia artist Jeffrey Thelin has fulfilled his chosen chore. Fusing a love of photography and geometry, he channels his passion through digital […] 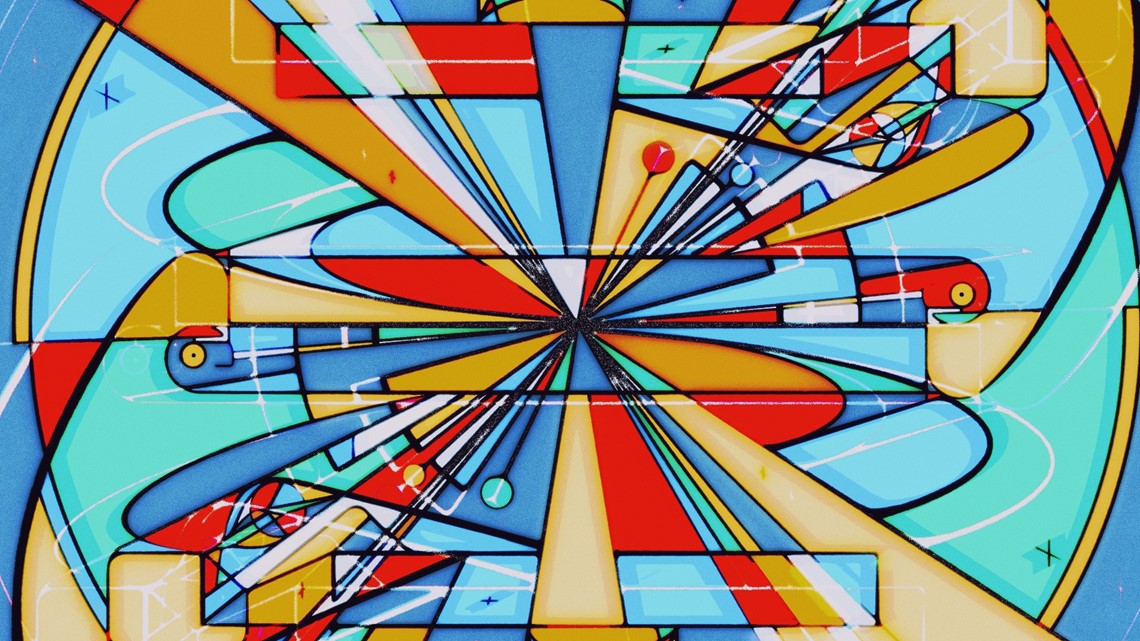