Skip to content
What you’re looking at is known as the MCY 96, and even though it’s not some gigantic superyacht with helicopter pads and a garage for your supercar, it has received numerous awards since its birth. So it makes sense to bring it to your attention so that you can see and understand what an award-winning lifestyle looks like. I know that “award-winning lifestyle” sounds weird, but that’s really what’s happening here.

To understand a bit about the vessel, we first need to have a look at its creators. In this case, famed Monte Carlo Yachts and Nuvolari Lenard are responsible for this ravishing creature. If you don’t know anything about Monte Carlo Yachts, you are not alone. They were officially founded in 2008, but since then, have cruised into the hearts of many customers worldwide and are now even considered one of the top five ship builders around.

As for Nuvolari Lenard, they are a yacht design studio founded in 1992 in Italy by Dan Lenard and Carlo Nuvolari. Anything more than letting their work speak for itself needs not be done. Have a look at the gallery if you haven’t done so already, and you’ll understand the level this team likes to operate at. 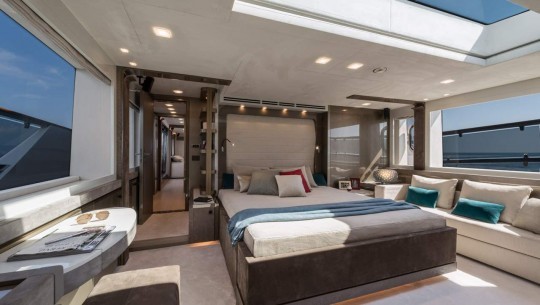 Coming back to the 96, it is the sort of vessel that showcases the abilities of both these teams. For instance, the main area of attraction, and one that has also received the award for Best Flybridge Yacht from Asia Boating Awards, is well, the flybridge.

This area is an exterior space that offers the possibility for a shaded retreat if needed, thanks to a retractable awning overhead. Aft we find an exterior dining set suitable which seems to be only suitable for ten guests. Heading towards the bow, there’s space for a jacuzzi in the plans. Mind you, the photos do not reveal this perk, while the lounging and bar sections are just as they have been drawn up. At the very front of the ship, we can see a massive lounge bed and more pads with forward-facing views to crisp yourself up while enjoying the scenery.

The main deck is a bit different in that it introduces the owner’s loft with only lateral views of the surrounding exterior. Unlike other owner’s suites we’ve seen, which place a large emphasis on a forward-facing view, the 96 seems to be geared more towards privacy and intimacy. Heading aft from the suite, we are greeted by another interior fining set and lounge and entertainment area. Outside, another group lounge is found. 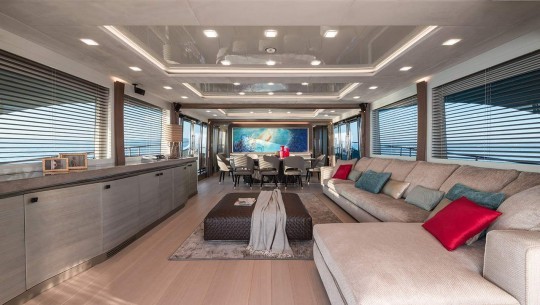 The lowest deck on the ship includes sleeping quarters for your guests and crew. Here, the 96, if ever to be commissioned for another build, has the possibility for three different layouts depending on the level of luxury you want to offer guests and crew.

The one thing I enjoyed most about this vessel is, of course, the owner’s loft. Why? Even though there is no forward view of the ship, this space has been reserved for an en-suite bathroom, the entertainment center, and a walk-in closet. Oh, and the lighting. A skylight spanning nearly starboard to port fills the space with natural light. Then again, the guest rooms aren’t too shabby either.