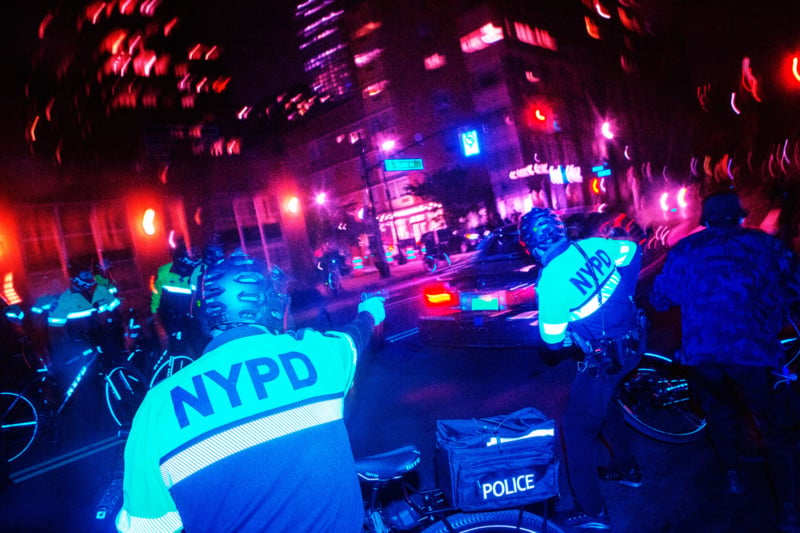 Brooklyn-based photographer Andrew Hallinan has been attending Black Lives Matter protests for a year. As he started to bring his camera on marches, he began to capture the police in striking rave-like flash photographs, blending fine art and social action.

Hallinan photographs the New York Police Department the way raves or punk musicians are often shot: stark, queasy, vibrant portraits that get close and stay close. This is no accident: Hallinan has gone from street photography, to managing the studio of a major photographer, to music venue photography, and back to street photography — this time for a project titled 1312.

1312 documents the NYPD, starting last summer and into the present day, as they appear at Black Lives Matter marches: often in great numbers, heavily armed, and leading mass arrests. 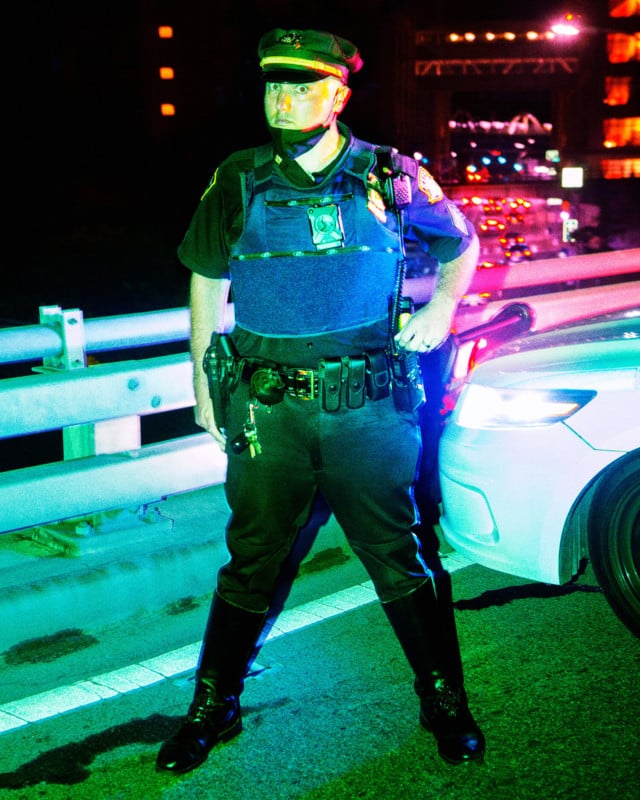 Hallinan’s 1312 photographs showcase police officers hiding their badge ID numbers under “thin blue lines” to avoid identification if photographed while wearing subtly violent fashion choices: gloves with #WAR written on them, Punisher skulls ironed onto police vests, or simply not wearing masks during a pandemic that has killed over half a million Americans. These might not be the details protestors would notice in the heat of a march or an arrest, but Hallinan’s intense on-camera flash captures the small aspects of the police response to protests as well as the big picture — the sheer number of officers and their often frightening presence at events that are triggered by police brutality and murders.

During this past year of reckoning with racial injustice through direct action and protest, Hallinan saw a much-needed niche for people to photograph the police, not just protestors. Moreover, he saw photographers at protests often go above and beyond to appease police or work alongside them, behavior he saw as frightening given the hundreds of videotaped examples of police violence at protests, or the police who rounded up photographers and journalists and photographed their faces just a few weeks ago. 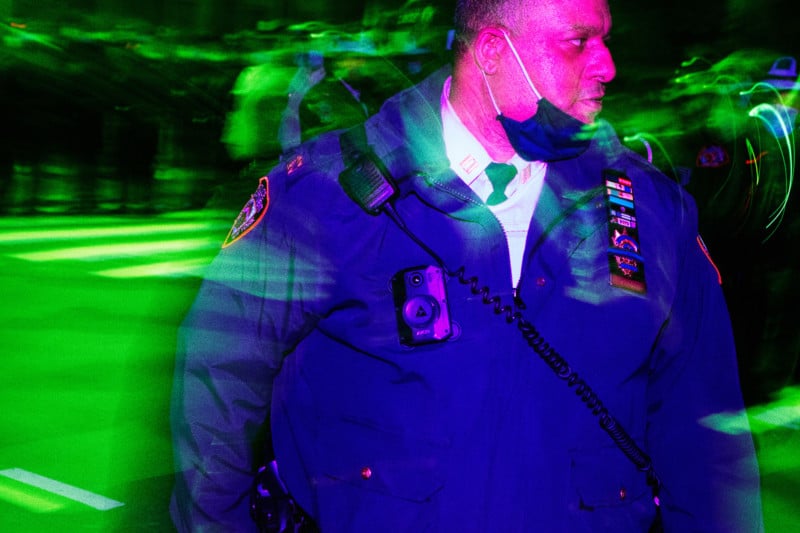 1312 runs counter to the ways police document protesters: Hallinan is a protester photographing the police as a form of protest and art in itself. After the months he’s been in the streets, Hallinan has been learning best practices of police photography and how others can respectfully photograph protests. Speaking to the media for the first time, he sat down with PetaPixel to discuss his 1312 project and techniques. If you’ve been taking pictures of music events and are moving to protests, or vice versa, you’re likely to discover the overlap between the fields as Hallinan did at the beginning of the pandemic. After working as a portrait studio manager, he photographed music at Melting Point, a rave collective that raises funds for migrant rights. On a given night he might have to work his way through a crowd, light difficult rooms, prefocus on moving subjects while moving himself, and shoot through darkness and fog. 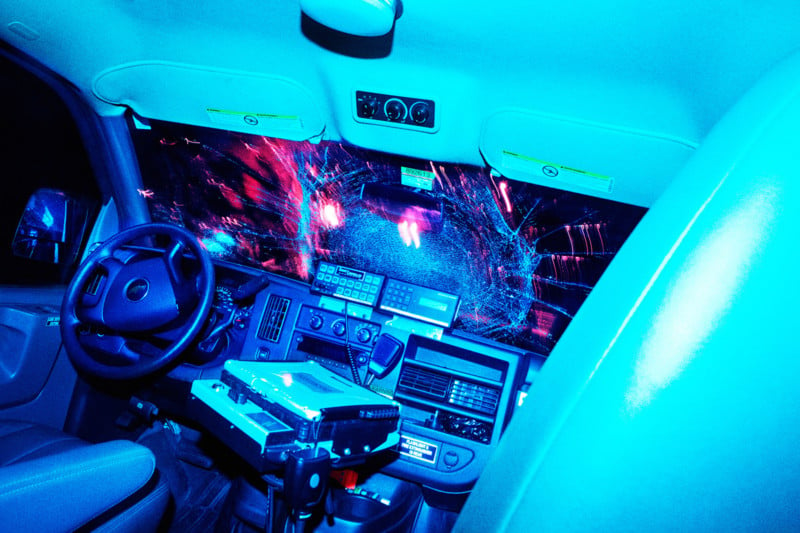 “But you have to do all that without stressing or trying to figure out how to do the settings,” he says. “It had to become muscle memory.”

Once the pandemic hit, Hallinan took these same skills onto the street, during protests that were often at night, always moving and potentially chaotic, and with their own fogs (tear gas, fire extinguisher foam, burning trash). To him, the most important skills were full awareness and the ability to move through a crowd as part of it, rather than as an observer.

Acting like an observer, Hallinan suggests, impedes photographs of the genuine on-the-ground experience.

“Especially once you become a fixed spirit in these scenes, you’re just like, ‘Oh, that’s Andrew with the color flash and he jumps around and whatever.’ I think it puts people at ease, at least with the music and with the protests. One of my aims is to at least attempt to convey the actual feeling of being there to the viewer. And I think the best way to do that is to be fully present yourself.” Before even picking up a camera, Hallinan spent four months protesting in Rochester, NY, and participated in marches and events before he returned to New York City and noticed a lack of photographers who focused on the police.

“I had to fill a role that maybe wasn’t being done,” he says.

Protestors have been directly confronting power in the streets, but what does that look like through the eyes of a protesters? What does it look like when you approach a police force that’s comparable in scale and gear to a military force?

To pursue portraits around this question, Hallinan felt he had to get aggressive with his photography: that meant wandering away from crowds, walking up to police in riot gear, and getting constantly — uncomfortably — close in his photographs. The same full awareness from rave events comes in handy when reading the body language of police: it’s easier to tell when their limits are being pushed, when they are getting mad, and how they are moving or reorganizing themselves.

This aggressive style translates to Hallinan’s choice to rarely use his camera’s viewfinder, instead holding the camera far out, placing it to the ground, getting experimental, even if it looks incomprehensible to passersby. He shoots with a 24-70mm lens in order to be flexible and works in dark environments where autofocus is not as reliable. Instead, he keeps constant attention to his zoom and ingrains in his head what the frame of his shot is depending on the zoom and alters focus from there. This method allows him to get creative in shot layout and quickly react to changing situations. As for the surreal, bright neons that color his photographs, that’s a mix of one gelled on-camera flash mixed with ambient light as a secondary source. He combines those with photographic techniques like dragging the shutter, which he uses to paint in even more vibrancy.

However, in a calmer moment and when police demeanor is better, Hallinan chooses to slowly frame up portraits of police which are often black and white—instead of the more run-and-gun aggressive style. The slow portraits, he says, have a double purpose.

“I want to see how they react when they feel examined,” he says. “Because they are all filming us. They are why we’re out in the streets.” 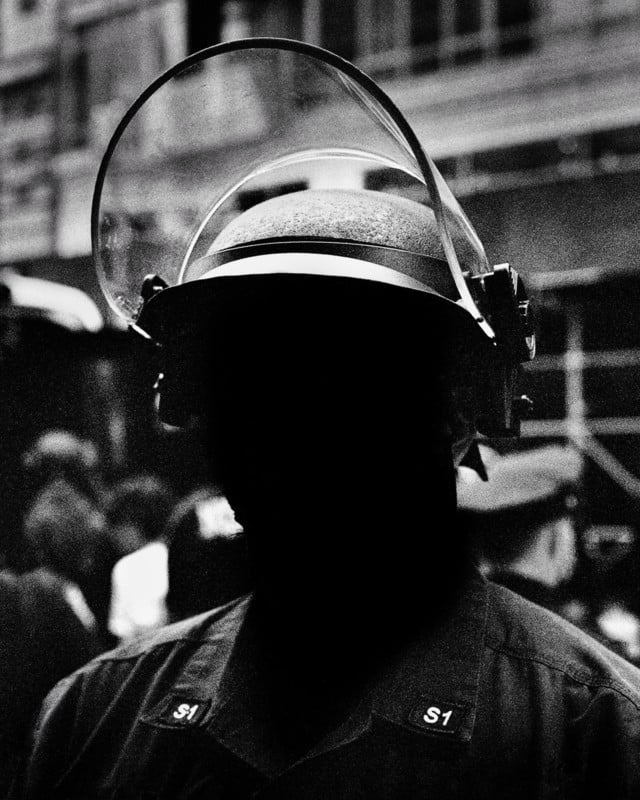 In New York City, Hallinan has seen constant use of helicopters, drones, and TARU (Technical Assistance Response Unit) teams, all of which the police use to film and photograph protests and protestors for their own use. Even photographs of protestors by protestors can end up in the hands of police, another reason why Hallinan doesn’t want to focus on photographing crowds — “Photograph cops, not comrades” is a common refrain.

“The way in which I move and interact with the cops and photograph them I want to be in itself a form of protest, even if I never showed this to anyone,” he tells Petapixel.

Image credits: Photos by Andrew Hallinan and used with permission.

Fri May 21 , 2021
April 30, 2021 Social Security tax is a key payroll withholding that every one employers should deduct from employee paychecks.Article What Are Solo 401s? The size of offices has trended towards the small measurement lately, with a median dimension of round a hundred and forty sq. feet. Some are suggesting […]