Of course, photographers and artists recognized the aesthetic merits of photography before the 1970s. Alfred Stieglitz began exhibiting photographs in New York in the early 1900s as part of his project of introducing modernism to America. Out West, Ansel Adams invested in the purity of the photographic image as he used his camera to capture landscapes in ways unique to the medium. In the aftermath of World War II, however, painting and sculpture were paramount, and artists’ efforts to express the inner world rather than depict the outer one left little room for the mechanical work of cameras. When Grundberg arrived in New York in 1971, that had begun to change. Andy Warhol was famous by then; artists like Robert Rauschenberg had been using photo-based techniques in mixed-media work for some time; the Museum of Modern Art’s 1972 posthumous retrospective of Dianne Arbus was a landmark event.

And something new was happening with photography and the avant-garde. Earth and performance art required documentation so that audiences would know about, say, Robert Smithson’s “Spiral Jetty” or Adrian Piper’s latest provocative intervention as the Mythic Being. Grundberg shows, however, that artists like his friend Gordon Matta-Clark were becoming increasingly interested in the image of their performances or interventions in the landscape. Photography was no longer just a tool to let others know about an artist’s creation; it had its own properties that were inseparable from the artist’s creative work. Grundberg is adept at showing this development through personal reactions: in particular, his realization that this “feeling of being at sea with my own experience” was “an infallible indicator that one may be experiencing real art.”

The ’70s came to be known as a decade of artistic pluralism, and Grundberg astutely conveys the heady atmosphere of a New York affordable enough to be a home for experimenting artists and gallerists. It was also a time of poverty and crime, he notes, bringing to mind Jacob Burkhardt’s thesis that the arts flowered in the Italian Renaissance because politics was such a cruel mess. Grundberg treks up to Buffalo and Rochester to see shows, meet photographers and swim the happily uncharted waters of what came to be called postmodernism — waters riled by the conceptual/affective influence of the California tricksters William Wegman and especially John Baldessari.

Conceptual art was key to the shift in photography’s artistic status, and the discourse about art often seemed inseparable from the experience of pictures. Susan Sontag and Rolland Barthes took photography seriously as art, artifact and cultural symptom, while others argued that in contemporary culture there was no escaping a reality already infused with images. Indeed, thanks to the insightful critic Douglas Crimp, the word “pictures” — also the title of the 1977 exhibition he organized — came to be loaded with significance, pointing to how artists disdain depictive purity in favor of deconstructive reframing and quotation.

By the 1980s, Cindy Sherman’s mercurial practice had made her a paragon of the postmodern. This artist pictured herself in so many conventional (and then shocking) guises, it seemed impossible to tell where the real ended and the image began. Sherman was always a step ahead of her critics and audience, “disappearing into the myriad of identities available to her,” Grundberg writes, “in quintessential Postmodern fashion.”

The ’80s saw the rise of “new documentarians,” and the book introduces readers to German artists who sought a cool objectivity, as well as African American artists who used narrative to convey political meaning. Grundberg is especially interested in Nan Goldin’s “Ballad of Sexual Dependency,” which he says is to the 1980s what Robert Frank’s “The Americans” is to the 1950s. Goldin documented her life as a downtown artist with “an obsessive attention” to “nearly all permutations of human interaction.” The sad message he finds in her work is that personal intimacy is not a cure for social isolation, but the joyful “performances” of these pictures through slide shows in clubs at least mitigated the loneliness documented.

Grundberg takes readers through the culture wars of the 1990s — from the appropriation of pornography in Robert Mapplethorpe’s work to the debates about originality and commercialism that have peppered photographic practice over the last 20 years. He notes that we have come to accept that cameras refashion the world rather than just present a slice of it for our consideration, though I think he may underestimate how strong the longing is for the truth of an image — how deep the desire for depiction goes. We know that images alter, but that doesn’t mean we are satisfied by mere alteration.

Inside an Artistic Revolution From Pop to the Digital Age

Wed Apr 21 , 2021
Muente is a professor of art at Northern Kentucky University. Enlightening and reminding viewers of their own humanity, his paintings portray facets of the human condition such as loss, doubt, wisdom, and faith. “I try to make narrative paintings that resonate with the viewer’s imagination. The work often asks more […] 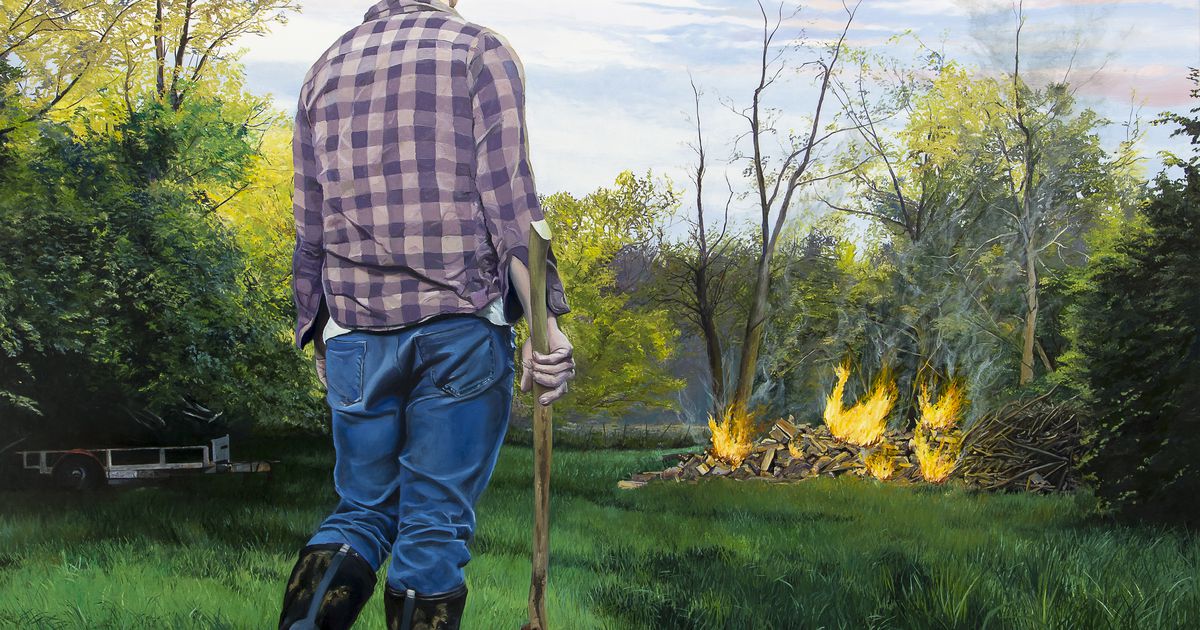