You may have seen our recent swarm of stories on all things Academy Museum of Motion Pictures. The museum opens Sept. 30 and let’s just say the A, C, D and E keys have faded, entirely, on my computer keyboard after having typed out “Academy Museum” so frequently. But what about that other filmmaker museum rising in L.A.?

Hi, I’m arts writer Deborah Vankin, filling in for Carolina Miranda (whose computer keyboard, no doubt, has a few faded letters by now as well). I’ll start this week’s Essential Arts with an update on George Lucas’ spaceship of a museum rising in Exposition Park next door to the Coliseum.

Another opening on the horizon

The $1-billion Lucas Museum of Narrative Art is on track to premiere in 2023. Los Angeles has not had a major film museum until now, with the Academy Museum opening. But how much visitor appetite is there? And is there room for two large cinematic arts museums in one city?

“We’re super excited about the opening of the Academy Museum — it’s so necessary as a new addition to the Los Angeles community and it will expand the cultural landscape,” Jackson-Dumont said. “But I’m happy to say that the only film museum in the city is the Academy Museum because the Lucas Museum is a museum dedicated to narrative art; it’s not about film only.”

Narrative art, she added, “cuts across space and time and really is about visual storytelling through a range of material. It’s photography, it’s painting, it’s sculpture, it’s ephemera from newspapers and magazines, it’s all of those things.”

COVID-19 health and safety protocols may have slowed construction and pushed the Lucas Museum’s targeted 2022 debut, but the futuristic-looking Ma Yansong-designed building is progressing, Jackson-Dumont said.

The museum secured the final beam in its steel structure and “topped out” in March. Construction of two movie theaters, second-floor classrooms and the fourth-floor galleries — about 80,000 square feet of exhibition space — is underway. The galleries will feature works from Lucas’ personal collection of more than 100,000 pieces of fine and popular art as well as “Star Wars” ephemera.

The museum recently hired a deputy director of public programs and social impact, Regan Pro, who comes from the Seattle Art Museum, where she held a similar position. Key positions in the library, operations, programming and curatorial departments will be announced in the first quarter of next year.

The Lucas Museum also is beefing up its collection. Earlier this month it acquired Alice Neel’s painting “Fish Market” (1947), which was part of the Metropolitan Museum of Art’s recent retrospective, “Alice Neel: People Come First.” In May the Lucas Museum acquired Robert Colescott’s 1975 painting “George Washington Carver Crossing the Delaware: Page From an American History Textbook,” which Jackson-Dumont calls a vehicle “to explore and unpack racially, socially and historically charged and significant figures.”

But Jackson-Dumont may be most excited about a work the museum acquired in late 2020: Frida Kahlo’s “Autorretrato Dedicado al Dr. Eloesser” (Self Portrait Dedicated to Dr. Eloesser) (1940), which was included in the de Young Museum’s recent exhibition “Frida Kahlo: Appearances Can Be Deceiving.”

“It’s one of her most important works,” Jackson-Dumont said. “It was painted during a particularly tumultuous time in her life, and it incorporates images that tell about aspects of her experiences. There’s a thorn necklace around the neck, the earrings were a gift from Picasso, the banner inscribed with a dedication to the physician that helped her during her time in the Bay Area. We’re looking forward to inviting people to discuss this work, see this work. I think this is the “Mona Lisa” of Mexico, it’s beautiful.”

The museum has also added several archives to its collection. This spring it acquired a nearly 3,000-object collection of artworks and other materials by Mexican political lithographer José Guadalupe Posada. It also acquired Judith F. Baca’s archive documenting the making her epic, half-mile-long mural, “The Great Wall of Los Angeles.” She’s the first female muralist represented in the museum’s collection.

And if you’re intrigued by the colorful art on the museum’s construction fence along Bill Robertson Lane, that’s a project between the Lucas Museum and arts nonprofit L.A. Commons. The art is by 21 local students who worked with muralist Noni Olabisi and L.A. artist Luis Mateo to create narrative art for the fence. The works touch on themes of neighborhood and community, family and friendship.

“It’s exciting,” Jackson-Dumont said of all the momentum. “It’s a really amazing moment. We’ve been busy on every level.”

In other museum news …

“What’s happening over at MOCA?” That was the question of the week as top-level leadership changes at the museum unfolded in a chaotic manner. On Tuesday, MOCA offered answers in an email: It confirmed that former director (then artistic director) Klaus Biesenbach is headed to Berlin, and newly hired executive director Johanna Burton — who was to co-lead the museum with Biesenbach — has been named sole director.

Burton is the first female director in MOCA’s 42-year-history. What should have been a celebratory moment for Los Angeles and the museum turned into a botched transition of power and an embarrassment for the institution’s new leader. Here’s my story on Burton’s historic appointment.

L.A. and O.C. museum happenings this month compiled by listings coordinator Matt Cooper include a must-see survey of videos, installations and sculptures by Swiss multimedia artist Pipilotti Rist at MOCA’s Geffen Contemporary as well as rare Picasso prints at the Norton Simon Museum. A sound and video installation by avant-garde composer William Basinski at the Long Beach Museum of Art incorporates footage from the Sept. 11 terrorist attacks, and contemporary works inspired by traditional East Asian ink art at the Los Angeles County Museum of Art. Plus — wait for it — getaway cars, motorcycles, boats and other vehicles from James Bond movies will be on view at the Petersen Automotive Museum.

Finally: little-known factoids about the Academy Museum and a handy guide to walkable destinations in the area. Make a day of it!

How to end a ruinous war between Athens and Sparta? Organize a rollicking sex strike among Greek women. So goes the Troubadour Theater Company’s “Lizastrata,” a campy remake of ancient Greek playwright Aristophanes’ antiwar comedy, “Lysistrata.” The production is a cabaret drag show-like homage to Liza Minnelli, writes Times theater critic Charles McNulty, who says in his review: “It felt almost sacrilegious to be cackling, shimmying and occasionally blushing in my seat at the majestic Pacific Palisades venue, where just a stone’s throw away the ‘Statue of a Victorious Youth’ stands triumphantly in the hallowed silence of the museum’s other archaic treasures.”

“Hiding in what should have been plain sight,” Times classical music critic Mark Swed writes in his review, “this grippingly poetic and politically candid 9/11 response hits home. It could have been written the day before yesterday.”

Many of Dudamel’s fellows are women, notes Swed, and at least one of them is “sure to smash the orchestra glass ceiling to smithereens once and for all.”

Enjoying this newsletter? Consider subscribing to the Los Angeles Times

Your support helps us deliver the news that matters most. Become a subscriber.

The Met and that dress

“The medium is the message,” Rep. Alexandria Ocasio-Cortez (D-N.Y.) said on Instagram of her Met Gala dress. What’s your take on AOC’s controversial white gown, which said “Tax the Rich” on the back? Christi Carras reports.

A legend of this fall

At 81, choreographer-director Graciela Daniele is marking dual milestones: After 10 Tony Award nominations, she is finally going home with a prize — a special Tony for lifetime achievement, to be bestowed upon her Sept. 26. Meanwhile, on the opposite coast, the Old Globe in San Diego is opening “The Gardens of Anuncia,” composer-librettist Michael John LaChiusa’s musical based on Daniele’s extraordinary life. Times staff writer Daryl Miller has the interview with the woman who danced in the original companies of “Follies” and “Chicago,” choreographed “The Mystery of Edwin Drood” and is revered for her work on “Ragtime” and “Once on This Island.”

Los Angeles Opera opens its season this weekend inside the Dorothy Chandler Pavilion with Verdi’s “Il Trovatore.” The venerable Ojai Music Festival — canceled last year and postponed from summer this year — is back at long last this weekend, with John Adams as artistic director programming the likes of Icelandic pianist Víkingur Ólafsson and Americana singer-songwriter Rhiannon Giddens. Performance artist John Fleck has a cabaret-style work in progress running Saturdays at the Odyssey Theatre. Rodrigo y Gabriela take center stage Saturday and Sunday at the Ford in Hollywood. And A Noise Within in Pasadena opens its 30th season with Lisa Peterson and Denis O’Hare’s acclaimed “An Iliad,” with company members Deborah Strang and Geoff Elliott alternating in a solo show reimagining Homer’s ancient tale. All of this and more gets wrapped into Cooper’s weekend best bets. Time to get out and about!

Sun Sep 19 , 2021
In addition to Jusu, five other artists from Trenton will contribute to the project including recording artist Umar “BIG OOH!” Alim, singer/songwriter Hana Sabree, poet Terra Applegate, and videographer Diego Gordon. Jennet Jusu, Bentrice’s sister, will incorporate dance. “No matter what the paper says, no matter how you perceive people, […] 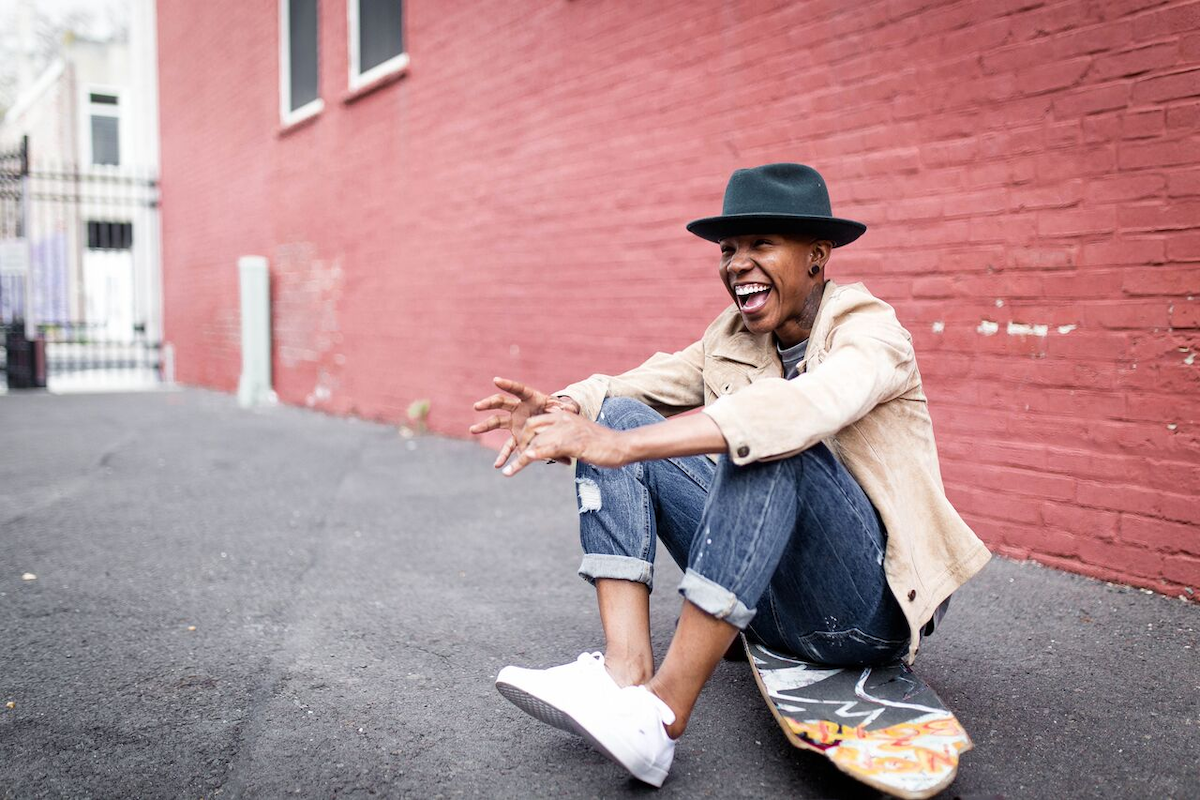