One hundred and forty years later, the business, now known as Art Outfitters and owned by Kerry Kemp, is still keeping Arkansas artists equipped with materials they need to create.

Along with Besser Hardware, which also started in 1881 in Little Rock, the store is one of the oldest retailers in the city.

It has been a circuitous route, with name changes and relocations, a couple of world wars, the Depression, recessions, two pandemics, a fire, the rise of big box stores and internet shopping.

By the 1890s, with the popularity of photography rising, the pharmacy transitioned to Jungkind Photo Supply, selling not just camera equipment but surveying tools and, yes, art supplies, Kemp says. Over the years there were several moves, mostly to different spots on Main Street.

In the 1960s, the Jungkind family sold the business to Dale Gordon of Kansas, who owned of a chain of camera shops.

Under manager Robert Bumgardner, the store also started selling printing supplies as Jungkind Photo-Graphic and grew to nine locations across the South.

Kemp was a 19-year-old student studying art and journalism at the University of Arkansas at Little Rock when she went to work as a clerk in Jungkind’s art department in August 1979. The store’s home at the time was at 12th and Main streets.

“I loved the job more than I did college,” she says.

In late 1996, Gordon and Bumgardner decided to sell the printing and graphic business and asked Kemp if she was interested in buying Jungkind’s art department.

Of course she was.

A fire at 917 W. Seventh in February 2005 threw a wrench in that plan, and in the aftermath, Kemp decided to salvage the building, move Art Outfitters over to the ground floor and live upstairs. The store has occupied this spot since 2006.

“It was just too charming to let it die,” she says of the space, which is open and bright and highlighted by its high ceilings and exposed brick walls.

There are craft supplies as well, along with materials for book binding and, Kemp’s favorite, decorative paper.

Kemp, with lavender streaks in her hair, stands near a display case from the original Jungkind’s drugstore on a Friday morning in May. Her husband, Tim Joiner, sits nearby. 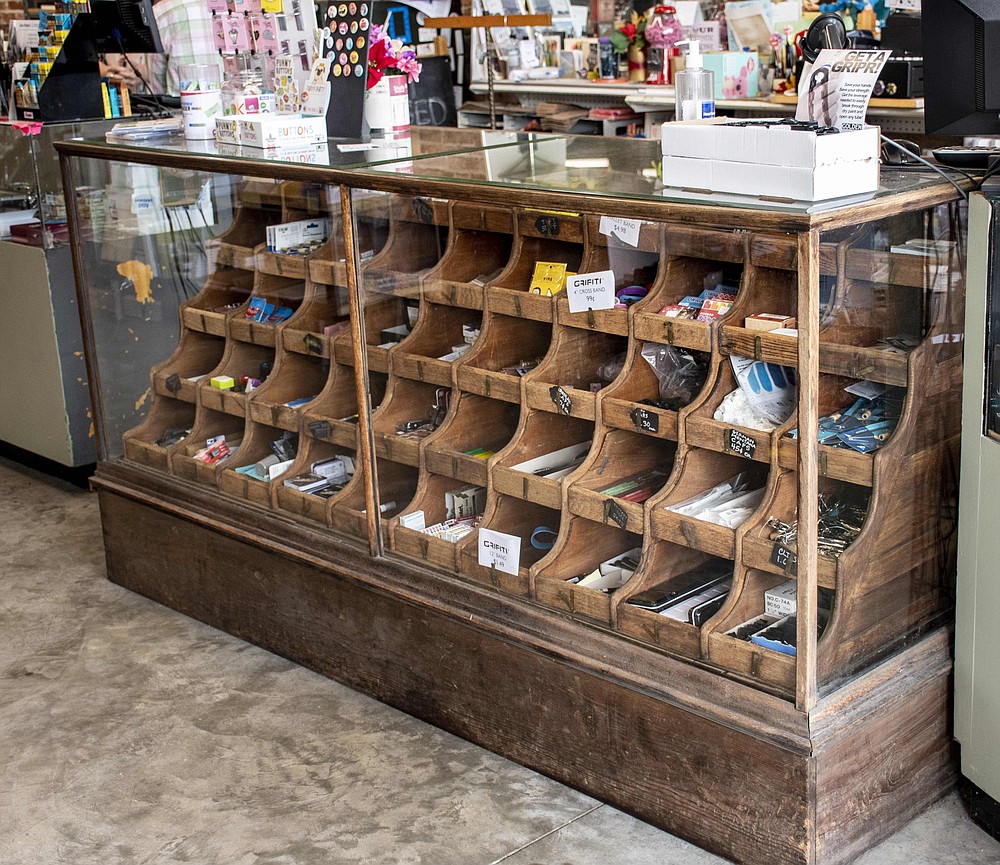 An antique display case at Art Outfitters dates from the historic shop founded by John A. Jungkind in 1881. (Arkansas Democrat-Gazette/Cary Jenkins)

Hanging on the wall behind the counter are artworks, including portraits of employees and a richly detailed drawing of the store’s interior by Little Rock artist Richard DeSpain.

In the store this morning is the rest of the staff: Kemp’s sister, Beth Darr, who also worked at Jungkind’s; Matthew Castellano and Kemp’s niece, Anna Warner.

Anna’s mixed-breed dog Merle Haggard, one in a long line of Art Outfitters’ shop pooches, lounges in a pen nearby (Suki, Darr’s Maltese-yorkie mix, is usually here but is being boarded this morning).

The Art Outfitters crew is made up of artists.

Kemp is a calligraphist who often teaches workshops through the store and also creates handmade books; Darr draws with pastels and paints with watercolors; Castellano makes etchings, prints and drawings and has been featured in exhibits like 2019’s “Plateau” at the Bookstore at Library Square in Little Rock and Fluke fanzine’s “Fluke Life Art Show.”

“The people behind the counter actually make art,” says mixed media collage artist, art instructor and longtime customer Diane Harper of Little Rock. “I’m an art-supply geek. I just love the stuff you make art with, and they know that. They are very knowledgeable about materials and supplies. If I have a question, they always know. The personal attention they give me is tremendous.”

Richard Stephens of Hot Springs is a watercolorist and art teacher who spent 45 years as a commercial artist. He began shopping at Jungkind’s in the early ’70s.

“As a workshop instructor, I have traveled across the country and visited and taught in several art supply stores, and Art Outfitters is as good or better than any of them,” he says.

The store carries good stock, Stephens adds, and, like Harper, he credits the staff for elevating the shopping experience: “They are very, very well educated as per those materials. They can answer questions and give advice. That’s extremely important and fairly rare, in my experience.”

Robert Bean is the department chairman of painting and drawing at the Arkansas Museum of Fine Arts Windgate Art School and an adjunct instructor of figure drawing at UALR. He’s been shopping at Art Outfitters since about 2000.

“I tell my students this,” he begins. “It’s not just a place where you buy supplies. It’s a place where you get expertise. I can go to Art Outfitters and ask really technical questions. If they don’t know the answer, they will find an answer. I’ve learned a lot about the materials I use as an artist just by shopping there.”

Harper, who teaches collage classes through the Windgate Art School, recalls a special pencil sharpener she needed for wax crayons.

“The crayons are encased in wood. I had to use a knife to sharpen them because I didn’t have a sharpener in that big of a diameter,” she says.

She told Kemp about it and, three weeks later, Kemp called with news that one had been found.

“They will look for the unicorn,” Harper says.

Bean was introduced to a specific brand of pastels through the store, “and that’s all I use now,” he says.

During a workshop at the store that featured a brand of acrylic paint, he says he “learned more about acrylic paint in four hours than I did in four years of college.”

There is a welcoming atmosphere at Art Outfitters; staff is just as helpful with newbies and customers who aren’t full-on fine artists.

“Somebody just left here who paints gaming miniatures,” Kemp says. Another customer from the day before was looking for tiny brushes to use specifically for painting miniatures.

The store also makes kits for school art classes — Mount St. Mary Academy has been a customer for decades.

Workshops and “supplies parties” are regular features. Saturday was the annual ARTstravaganza event of demos, classes and a 140th anniversary celebration.

It’s a big difference from 2020, when the pandemic disrupted the gathering and the ARTstravaganza goodie bags were handed out in drive-by fashion to customers in cars.

As covid-19 spread, Kemp spent four months running the shop alone with Joiner there for support.

She credits her customers for keeping the store afloat.

She’s grateful to loyal customers who wanted to “shop local,” she says. “We had several schools that decided to use us for art kits that hadn’t used us in the past.”

She also notes that during the past year there were more first-time shoppers “than I can remember, ever. People that were looking for something local and discovered us.”

A typical day at Art Outfitters is “a wonderful challenge,” Kemp says. “There are all sorts of mysteries to solve and fires to put out. We get a lot of phone calls with technical questions. We unload trucks, fill orders, answer questions. It’s never the same day twice.”

Kemp has been at this for 42 of the store’s 140 years. It’s obvious she still enjoys her work.

“It’s a big responsibility that I don’t take lightly,” she says. “It hasn’t always been easy, but I love this place and I love doing this.” 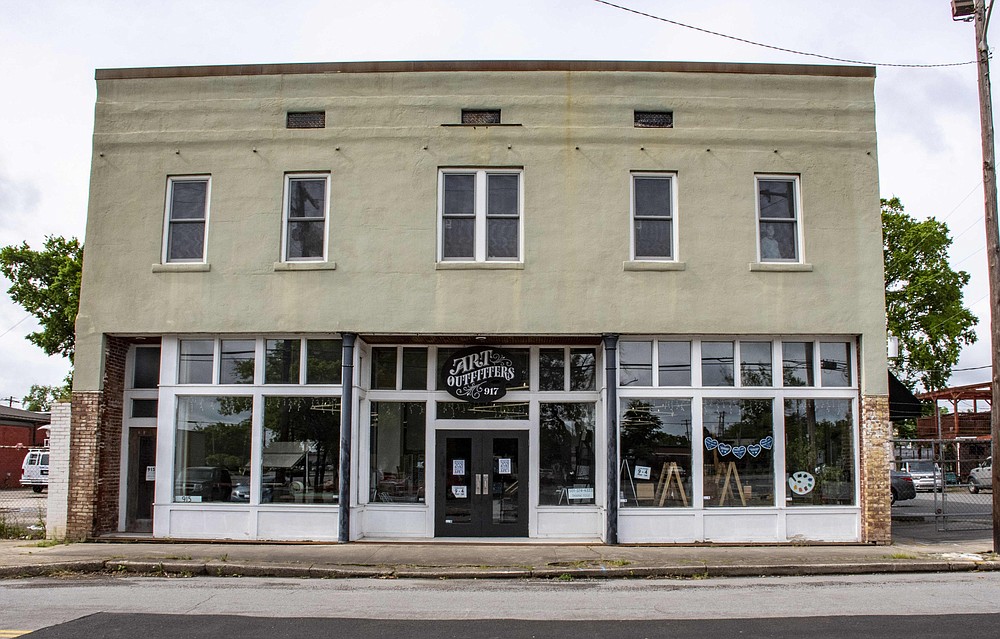 Mon Jun 7 , 2021
Digital Artwork Images menggunakan Fb. In case you are simply starting out and also you’re looking to put money into artwork, you’ll need to know who the artist is, if the work is in the major or secondary market (that is, will you be the first owner, or was it owned beforehand?), the […]